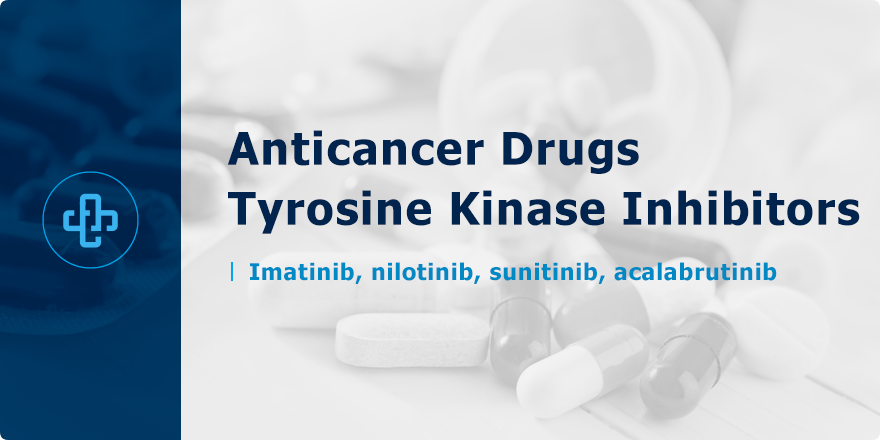 Tyrosine kinases are enzymes that belong to the family of protein kinases. They phosphorylate the cell by transferring the phosphate group from ATP to cell proteins and hence regulates signal transduction and intracellular signaling. Tyrosine kinases are responsible for cellular activities like cell division, cell differentiation, cell migration, cell growth, cell metabolism and apoptosis in response to internal and external stimuli.

All these drugs have a suffix –tinib, letting you know that they are small molecule inhibitors. We can classify tyrosine kinase inhibitors as follows:

Normally, the activity of tyrosine kinase is short and reversible due to the action of protein tyrosine phosphatases. In cancer, usually tyrosine kinases or their pathways are activated by mutation, gene amplification or chromosomal translocation, resulting in increased growth of cancerous cells. Since these pathways regulate cell proliferation, its survival, migration and angiogenesis, tyrosine kinase inhibitor medicines serve as effective weapons against cancer.

Tyrosine kinase inhibitors work by blocking the tyrosine kinase from sending chemical messages to the cells that signals them to grow. They inhibit the effects of growth factors like EGF, VEGF, PDGF and others. They stop replication of cells and the formation of new blood vessels that provide nutrition and oxygen to the cancerous cells. On the oncogenic tyrosine kinases, tyrosine kinase inhibitors compete with the ATP binding site of the catalytic domain. They interfere with specific cell signaling pathways, therefore serving as targeted therapy often with fewer adverse effects compared to previous therapies.

Lapatinib is also a tyrosine kinase inhibitor but it also targets a protein called HER2 (human epidermal growth factor receptor-2). This protein is present in large amounts in breast cancer. Since HER2 helps the cells in their growth and division, lapatinib stops the activity of HER2.

Here are some important clinical considerations about tyrosine kinase inhibitors pharmacology that you need to know:

That completes our study of tyrosine kinase inhibitors pharmacology. Check back to our pharmacy blog soon for more content on TKIs and other important medicines used in the treatment of cancers.