Thrombolytic Drugs Pharmacology | All the Facts in One Place! 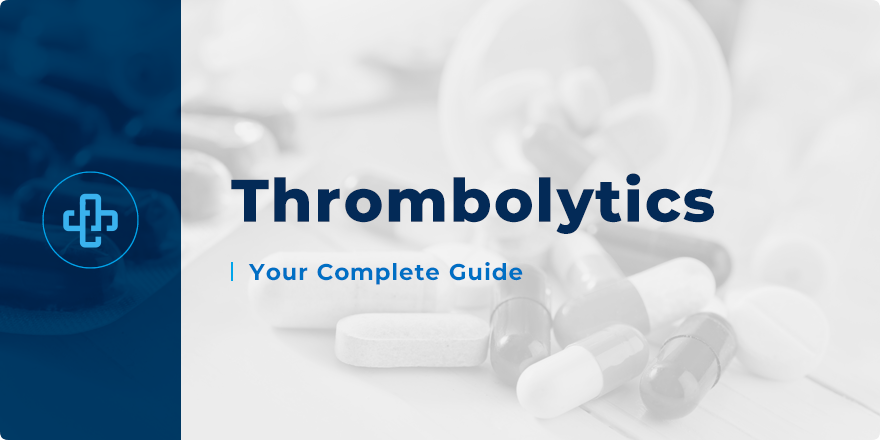 Regardless of their name, the medicines are used to eliminate clot formations within blood vessels.

For this reason, they are used to treat:

The purpose of treatment is to eliminate the clot and restore normal blood flow.

For acute ischemic stroke, thrombolytic therapy is most effective when administered within the first few hours of the stroke. Benefits of treatment decline with time.

For acute ST-elevation myocardial infarction, thrombolytic drugs may be used though they have largely been superseded by other therapeutic means – such as percutaneous coronary intervention (PCI).

Nonetheless, thrombolytic drugs can reduce mortality and so their use can be considered under defined circumstances.

Examples of thrombolytic drugs include:

Streptokinase is an exceptional case – it is used only once, not for repeat dosing. That’s because antibodies within the body can develop to combat its effects.

The purpose of thrombolytic drugs is to reduce clot size and formation.

They achieve this by catalysing conversion of plasminogen to plasmin. Plasmin acts to dissolve blood clots and restore normal blood flow to the affected infarcted – or blood-deprived – part of the body.

Circulating plasminogen (PLG), from the liver into the systemic circulation, adopts a closed position. Once plasminogen binds to a clot, it adopts an open form that is readily converted into plasmin; the serine protease that degrades and destroys blood clots.

Plasminogen is converted to plasmin by:

Examples of rTPAs include the exact medicines we discuss here –  namely, alteplase, reteplase and tenecteplase.

Side effects with thrombolytic drugs include:

Serious bleeding may occur, though it is rare. If it occurs, an antifibrinolytic drug such as tranexamic acid – may be used to limit bleeding.

When we talk about the clinical pharmacology of thrombolytic drugs, we need to think about the following factors:

Thrombolytic therapy carries serious risks and should, then, only be initiated by experienced clinical personnel.

The likely benefits of thrombolysis decrease with time and, where these drugs are used, close monitoring is required – particularly for the first few hours.

For more information and pharmacology quiz questions on thrombolytic drugs pharmacology, register with PharmaFactz today. Check back to our pharmacy blog soon for even more great articles on other medicines used to treat stroke, heart attack and pulmonary embolism!