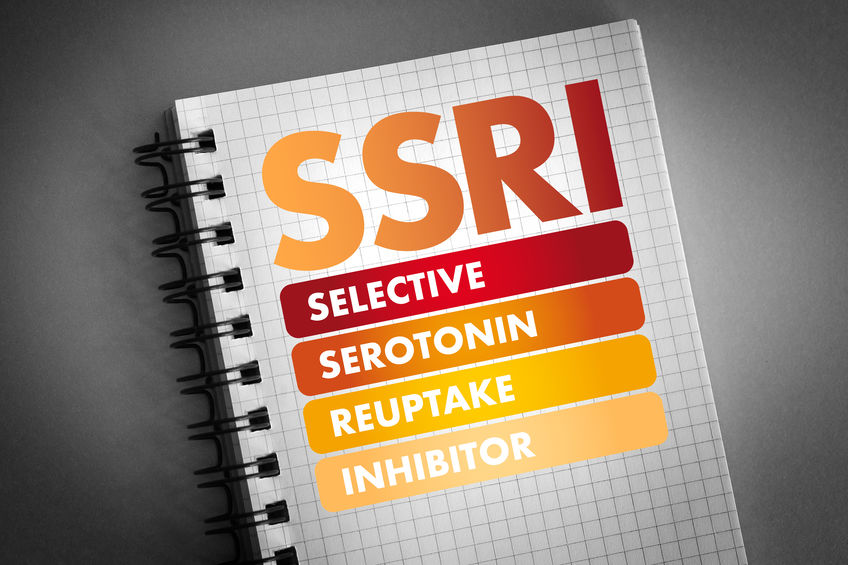 SSRIs are one of the most widely prescribed classes of medicines. Between 1999 and 2014, antidepressant use throughout the United States soared by 65 percent.

Of course, SSRIs are just one antidepressant class among many. There are SNRIs, SARIs, TCAs, among others. However, SSRIs remain a reliably prescribed drug class, and the science that underpins their use is worth examining. Since 1987, SSRIs have been at the forefront of the battle against mental illness.

Examples of SSRIs include:

SSRIs are indicated as first-line treatment for moderate-to-severe depression – in cases where talking therapies, such as cognitive-behavioral therapy (CBT) and lifestyle changes, have proven either insufficient or ineffective.

SSRI use is not limited to depression. They are also indicated to treat:

SSRIs may also be used to treat other indications not listed in this guide.

How do SSRIs work?

The postsynaptic cell contains receptors on its surface that bind serotonin. Upon binding to the receptor, the neurotransmitter can exert its effect and stimulate those effects throughout the brain. However, not all serotonin binds to these receptors. As a result, most serotonin lingers in the synaptic cleft, going unused.

Transporters – called monoamine transporters – shuttle up to and carriage any remaining serotonin, returning it to the host presynaptic cell. SSRIs interfere with this process, meaning that more serotonin lingers in the synaptic cleft to bind to postsynaptic cell receptors – stimulating those receptors.

However, chronic use of SSRIs leads to reduced serotonin production by the presynaptic cell. In turn, this leads to downregulation of postsynaptic receptors. However, the precise mechanism by which this process produces an “antidepressant” effect is currently unknown.

Because serotonin is associated with feelings of well-being and happiness, increased serotonin presence within the synaptic cleft is believed to augment this positive emotional response.

With this mechanism in mind, let’s review the primary side effects associated with SSRIs.

SSRIs are associated with their own range of potential side effects.

Common side effects include:

Some SSRIs – such as citalopram – prolong the QT interval. SSRIs also lower the seizure threshold. SSRIs are also linked to a higher incidence of bone fractures, skin rash, and photosensitivity.

If administered alongside anticoagulants and/or NSAIDs, SSRIs increase the risk of gastrointestinal bleeding.

Serotonin syndrome remains a consistent risk, particularly when SSRIs are administered alongside other serotonergic-elevating drugs:

Abrupt discontinuation from SSRIs is linked to nausea, headache, gastrointestinal effects, sleep disturbance, dizziness and flu-like symptoms. Discontinuation of SSRIs should take place over at least a one-month period.

When we talk about the clinical angle of SSRIs pharmacology, we need to consider factors such as:

Even though the precise mechanism between SSRIs and therapeutic effect remains unknown, SSRIs are widely prescribed and are – at present – associated with an improvement in symptoms compared to placebo (particularly when taken alongside talking therapies, such as CBT). For this reason, they remain an important antidepressant drug class in the wider battle against depression and a range of anxiety disorders.

That’s about it for our rapid review of SSRIs pharmacology! Check back to our pharmacy blog soon for even more facts about medicines that you need to know!