Proton-Pump Inhibitors Pharmacology | All the Facts in One Place! 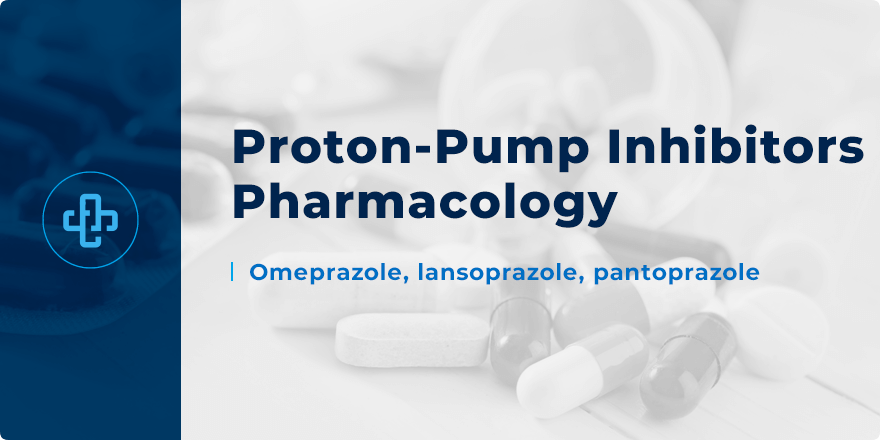 Proton-pump inhibitors are one of the most widely prescribed gastrointestinal drug classes.

They are used in the treatment of conditions caused by an excess in gastric acid production. For example – proton-pump inhibitors are used in the treatment of peptic ulcer disease, NSAID-associated ulcers, GERD and the eradication of H. pylori infection. PPIs work through the irreversible inhibition of the proton pump – a pump found on gastric parietal cells. PPIs can be identified through the suffix –prazole.

Examples of common proton-pump inhibitors include:

PPIs are used in the treatment of the following conditions:

In the case of H. pylori infection, proton-pump inhibitors are used in combination with other drugs, such as antibacterial drugs (typically two drugs).

With these indications in mind, let’s learn how precisely proton-pump inhibitors work; how they reduce stomach acid production.

However, because PPIs inhibit gastric acid production to a high degree, they also come with physiological consequences.

Notably, the mechanism of PPIs comes with metabolic consequences.

For example – stomach acid is necessary for digestion of nutrients – such as vitamin B12, proteins and calcium. When stomach acid production falls too low, this leads to a state known as achlorhydria.

However, PPIs as a class are very well tolerated. Common side effects include:

PPIs may also mask the symptoms of gastric cancer. Patients should be monitored for alarm symptoms, such as difficulty swallowing and weight loss.

There is tentative evidence that, when PPIs are administered to the elderly for prolonged periods, that it increases the risk of fractures.

When we talk about the clinical pharmacology of PPIs, we need to think about the following factors:

Proton-pump inhibitors have been around since the 1980s – the first PPI, omeprazole, being released in 1988. Since then, PPIs have consistently remained a highly effective choice at reducing gastric acid production. As they inhibit the terminal phase in stomach acid production and because they remain very well tolerated, PPIs will continue to remain an important drug class in the clinician’s toolkit.

Want to learn more about proton-pump inhibitors pharmacology? Register with PharmaFactz today to gain instant access to all the resources you need. In the meantime, take a few seconds to join our pharmacy blog newsletter (above) to receive all the latest facts direct to your email!