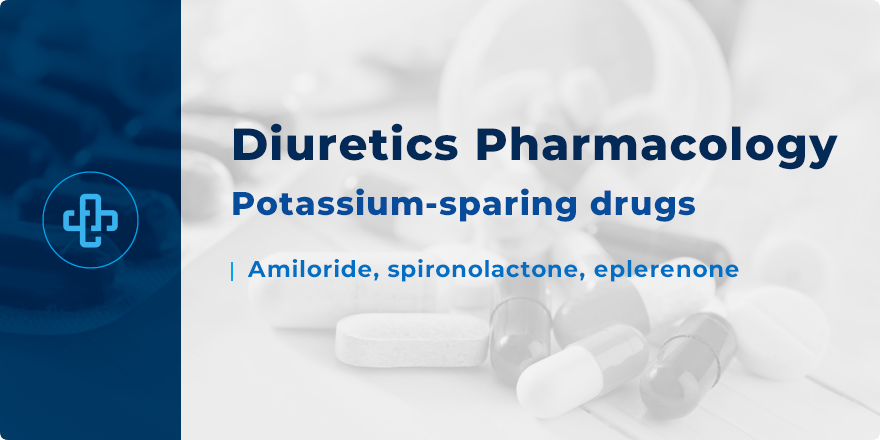 Potassium-sparing diuretics retain potassium ions where other diuretics do not. As a result, these medicines may be used to prevent and/or treat hypokalemia.

Hypokalemia is a clinical hazard. Symptoms include:

Potassium-sparing diuretics are used, then, as part of combination therapy in the prevention / treatment of hypokalemia. Hypokalemia may be caused as a result of other diuretics – such as loop or thiazide diuretics – that promote potassium loss. Other causes of hypokalemia include vomiting, diarrhea, diabetes type 2, hyperaldosteronism and hypomagnesemia.

Drugs such as spironolactone may also be used to treat ascites / edema due to liver cirrhosis and in the treatment of primary hyperaldosteronism.

Combination medicines – with a potassium-sparing diuretic and either a loop or thiazide diuretic – have been developed and are widely used in clinical practice. Examples include:

Combination medicines may be used, for instance, in treating congestive heart failure where the thiazide or loop diuretic tends to cause hypokalemia. The ratio of both drugs has been carefully calibrated to ensure that it minimally impacts potassium levels.

In clinical reality, though, this is not always achievable and electrolyte disturbances may manifest.

Amiloride is a relatively weak diuretic.

However, when amiloride is used alongside another diuretic, it enhances total diuresis and counteracts potassium loss to a greater extent than it otherwise would on its own. In the nephron, amiloride acts on the distal convoluted tubule.

By blocking epithelial sodium channels in the distal tubule, amiloride works to reduce sodium reabsorption and, by extension, facilitates water elimination. It enhances potassium reabsorption via the same means.

Side effects with amiloride include:

Clinical considerations with potassium-sparing diuretics include:

Aldosterone is a hormone produced from the adrenal cortex; a hormone responsible for acting on mineralocorticoid receptors in the distal convoluted tubule. There, aldosterone enhances sodium and water reabsorption through its activity on luminal epithelial sodium channels (ENaC) – increasing blood volume and blood pressure. Aldosterone also encourages potassium loss.

By acting as aldosterone antagonists – drugs, such as spironolactone, reverse the above effects. Clinically, this manifests as enhanced sodium and water elimination and an increase in potassium levels. Canrenone is the active metabolite of spironolactone.

Side effects with spironolactone include:

Clinical considerations with aldosterone antagonists include:

The clinical pharmacology of potassium-sparing diuretics is important. Both epithelial sodium channel blockers and aldosterone antagonists are widely used in clinical practice. However, they also come with their own risks and interactions. Where appropriate, then, their use and effects should be closely monitored.