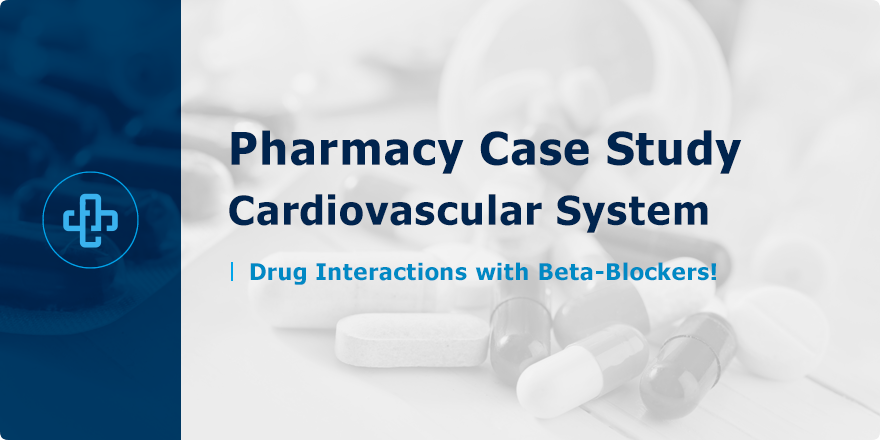 An 84-year old patient presents to the hospital with syncope and breathlessness on mild exertion. His medical records show that he has a history of COPD, angina, and hypertension, as well as elevated total cholesterol levels. The patient has previously been prescribed lovastatin, ramipril, diltiazem, indapamide, and amlodipine. However, 4-days ago, the patient visited a physician who did not have complete access to these records, but who did recommend that the patient take a beta-blocker, hence why the patient was then prescribed bisoprolol.

Tests were then conducted that showed the patient has a heart rate of 51bpm, with a BP of 92/58, and an ECG that shows third-degree heart block.

Based on these details, which of the patient’s medicines has interacted with the recently prescribed beta-blocker to cause heart block?

Heart block is an abnormal heart rhythm in which the heart beats too slowly – that is to say, has bradycardia. The term “block” is included because the electrical signals that inform the heart to contract are “blocked” (or partially blocked) between the atria and ventricles.

To understand what is causing the patient’s heart block, we must first understand the pharmacology behind how it may occur.

The patient has been prescribed the beta-blocker, bisoprolol. As we know, beta-blockers reduce the rate and force of cardiac contraction. Furthermore, they also interfere with the AV node conduction. Together, these two effects increase the probability of heart block.

However, this risk is enhanced if beta-blockers are taken with non-dihydropyridine calcium channel blockers – such as verapamil and diltiazem. Note above that the patient is already taking diltiazem – a drug that has similar pharmacological effects as those mentioned above. Together, the effects of beta-blockers are additive and so we can safely conclude that this drug interaction is what is causing third-degree heart block. Compared to other calcium channel blockers, the non-dihydropyridine drugs are relatively cardioselective. Whilst both drugs may be taken together, this should only be done under specialist supervision. This drug combination can also cause more serious effects – such as cardiogenic shock and asystole.

The patient is also taking another calcium channel blocker, amlodipine. However, unlike with diltiazem, amlodipine is a dihydropyridine drug that is not cardioselective. Instead, it operates primarily on the vasculature where it promotes dilation. Compared to diltiazem, it has limited effects on conduction and cardiac contractility.

The other drugs – indapamide – which is a thiazide-like diuretic, and ramipril, an ACE inhibitor, do not have effects on cardiac conduction and contractility and so can be ruled out.

Lovastatin does not interact with beta-blockers.

Check back to our pharmacy blog soon for more analysis of another pharmacy case study. Alternatively, you can become a registered member of PharmaFactz today and gain instant access to dozens more case studies to help you master your long-term clinical knowledge.