Comparison of means using the t-test:

Suppose we obtained two sets of replicate measurements – say one from an established method versus a new method or from one analyst versus another and performed basic statistical analysis. The calculated “true” mean values (µ) from two or more sets of measurements may not be exactly the same because of random errors which are always present in an experiment. However, we can establish whether there is a statistically significant difference between two means using a t-test.

Using jargon used in statistics, we could say that we are testing the null hypothesis (H0), which states that the two means from the two sets of replicate measurements are “the same” and that there are no real differences between the means. Any observed differences between the means are due to random errors. The contrary is referred to as the alternative hypothesis (H1). Using the notation used in the previous article for the “true” population mean, H0 and H1 may be expressed as:

The t-test involves the determination of a probability value (p-value) which we compare against a pre-specified α level (significance level – often 0.05). Depending on whether p < α or p > α, we can reject or accept the null hypothesis. Again, we recommend using software to perform statistical analysis. When a p-value is less than or equal to the significance level, we reject the null hypothesis.

The fluoride concentration in a toothpaste sample was determined in ppm by two trainee analysts from a calibration curve constructed using an ion-selective electrode (ISE). The two trainees performed the experiment using the same method and obtained their results in quintuplicate.

Side note: In reality, analytical measurements are performed in duplicate or triplicate (or very rarely in quadruplicate and quintuplicate) as doing experiments at sample sizes greater than n = 3 can be time-consuming!

Both the trainee’s determined fluoride concentration values have low scatter given that the s values are low and Cv <1%. However, the scatter is lower for trainee 1 (Cv = 0.1% versus Cv = 0.6%). Therefore, it can be concluded that trainee 1’s measurements are more precise.

Where ± represent 95% CI and s are in parentheses.

How to do the t-test for two means:

For this part, you need to use Excel.

State the null hypothesis (H0). In this case, there is no difference between the mean values of fluoride concentration determined by the two trainees. Any observed differences is due to chance.

Tabulate your data on Excel as shown below. Also include your results from performing basic statistics calculations:

Note: You may have noticed that there are two other options for the t-test. In the vast majority of cases in hypothesis testing, population variances are unknown. For this reason, you are more likely to choose the option for unequal variances. 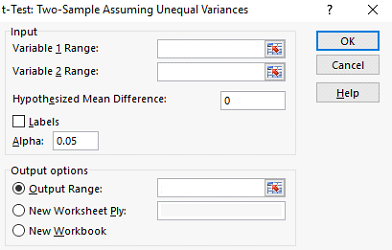 A table such as the one shown below should have been generated. 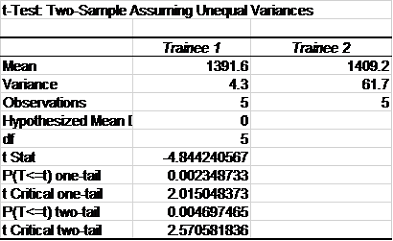 Make conclusions based on the p-value (two-tail).

Given that p < 0.05, we can conclude that the two means determined by the two trainees are significantly different so we reject H0.

Want to learn more about pharmaceutical calculations? Be sure to check out out our other pharmacy calculations articles right now!