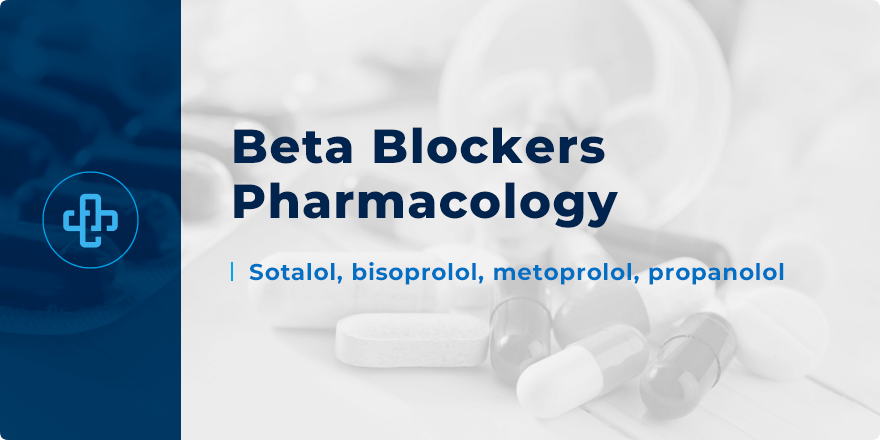 The pharmacology of beta blockers was conceived in 1964 when Dr James Black – a Scottish pharmacologist – developed the first such drug of this class, propranolol. Since then, beta blockers have evolved to become some of the most widely deployed drugs in the treatment of conditions such as angina, myocardial infarction, congestive heart failure, hypertension, atrial fibrillation, and cardiac arrhythmias – among others.  In this section, we take you through their mechanism of action, adverse effects, and pharmacokinetics – establishing an all-round understanding of these most important drugs, medicines which have been around over half a century.

Adrenergic receptors (also known as adrenoceptors) are G-protein coupled receptors whose ligands include epinephrine (adrenaline) and norepinephrine (noradrenaline). There are, as with almost everything in pharmacology, different subtypes of adrenergic receptor: both α and β subtypes. We need not concern ourselves with the α-subtype for now. The β-subtype is split yet further into three additional subtypes: β1, β2, and β3. Each of these beta-receptors is associated with different physiological effects, some of which can be found in the table below.

So as we can see, β1-receptor antagonists negate the agonist effects listed in the table – which is why beta-blockers are deployed in the treatment of cardiac-related conditions. β2-receptors are known to cause bronchodilation, meaning its agonists – salbutamol and terbutaline – are effective in the treatment of asthma and COPD. But it’s not all plain sailing. Some beta-blockers are nonselective – such as propranolol and timolol – meaning they antagonise both β1 and β2 receptors. Those beta-blockers which are selective for β1 – such as atenolol, bisoprolol, and metoprolol – are also known as cardioselective agents, as they only impact the heart.

Some beta blockers – such as pindolol, penbutolol, and oxprenolol – have partial agonist activity (PAA), also known as intrinsic sympathomimetic activity (ISA). This means that, at high doses, pindolol behaves in a similar fashion to agonists such as isoprenaline or epinephrine. Pindolol would not, therefore, have the same inhibitory effect on heart rate and contractility than a full antagonist would. Beta blockers with PAA or ISA are seldom used nowadays primarily for this reason. Other nonselective beta blockers – such as carvedilol and labetalol – have additional α-blocking activity.

Before concluding this section on the pharmacology of beta blockers, we must first acknowledge two further mechanisms by which they operate:

Some beta blockers are highly lipophilic – such as propranolol and metoprolol. These agents are well absorbed from the gut but do, however, undergo extensive first-pass metabolism. Most lipophilic agents have short half-lives, meaning formulators have designed modified-release formulations to prolong duration of action. There are also hydrophilic beta blockers – such as atenolol, nadolol, sotalol, and pindolol – which are incompletely absorbed from the gut. Unlike their lipophilic counterparts, these hydrophilic drugs undergo negligible first-pass metabolism. Half-lives of hydrophilic drugs also tend to be longer than their lipophilic counterparts.

There are a wealth of adverse effects associated with beta blockers – many of which depend on the type of beta blocker involved. Generally speaking – adverse effects include nausea, diarrhoea, cold extremities, worsening of Reynaud’s syndrome, bradycardia, hypotension, fatigue, dizziness, and altered lipid and glucose metabolism. Beta blockers are – despite these effects – well tolerated. Lipophilic agents – such as propranolol and metoprolol – cause greater penetration of the blood-brain barrier, leading to greater incidence of insomnia, vivid dreams, and nightmares.

Blockade of β1-receptors is associated with greater incidence of heart failure – particularly if the patient has pre-existing poor left ventricular function. Blockade of β2-receptors is, in contrast, associated with bronchospasm – which is why beta blockers are contraindicated in asthmatic patients. Nonselective beta blockers are more likely to cause hypoglycaemia, not least because β2-adrenoceptors typically stimulate glycogenolysis and pancreatic release of glucagon – both of which serve to increase plasma glucose. Beta-blockers should therefore be used with caution in diabetes.

The pharmacology of beta blockers is such that they increase triglyceride levels and lower concentrations of high-density lipoprotein (HDL) cholesterol. These effects are, though, quite modest – and are unlikely to lead to significant atheroma formation. Patients who overdose on beta blockers may be administered glucagon – as it increases cardiac contractions and decreases renal vascular resistance. Patients may experience bronchospasm while taking nonselective beta blockers – something which may be reversed by administering an anticholinergic – such as ipratropium.

Test your knowledge of the pharmacology of beta blockers with this quiz – ten questions covering just about all the material in this article.