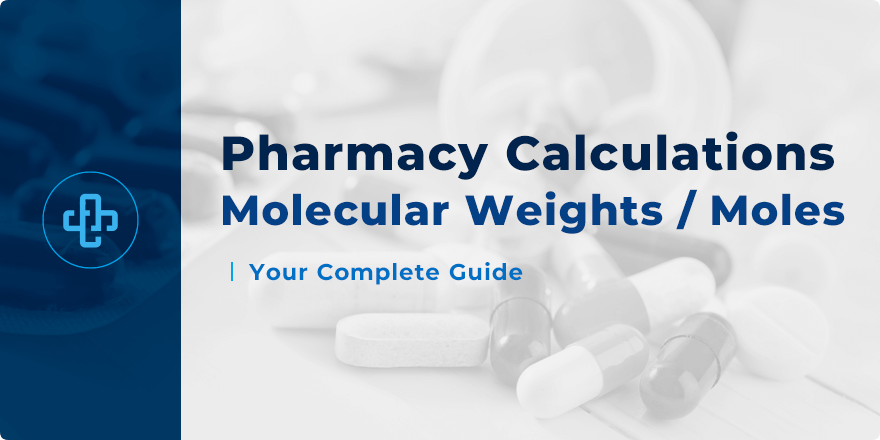 Knowing the theory behind and how to calculate molecular weights and moles is important.

Many pharmaceutical calculations depend upon a rich knowledge of these two concepts. The concepts themselves are not difficult. Rather than using kilograms or pounds, we’re using molecular weights and moles. You don’t need to visualize the concepts but you should have an idea of what we mean when we use these terms. The more you understand about the theory behind molecular weights and moles, the easier the pharmacy calculations become.

Below, we review twelve examples to help you get to grips with the step-by-step approach needed to effectively tackle these questions. We also covered the theory and practice of moles, molecular weights and Avogadro’s number too. Both articles complement each other, be sure to check it out when you’ve finished the below review.

Example 1
How many milligrams of sodium ions are in a 600mg tablet of sodium chloride?

Not sure where to find molecular weights? You can find these values, for each element, on the periodic table.

Of the molecular weight, 23 out of 58.5 consists of sodium – now, we simply need to multiply that value by the 600mg tablet:

Answer – 235.9 milligrams of sodium ions in a 600mg tablet of sodium chloride.

Example 2
What percentage of a 600mg tablet of lithium carbonate contains lithium?

Step 2 – Calculate the percentage of lithium inside the tablet.

Example 3
What weight of ferrous gluconate contains the same quantity of iron as a tablet containing 200mg of ferrous sulphate (dried)?

First, we need to determine how much iron is in a 200mg tablet of ferrous sulphate.

Now, we can answer the rest of the question. We need to find a weight of ferrous gluconate that contains the same amount of iron as the amount found in ferrous sulphate i.e. 73.68mg.

The empirical formula of ferrous gluconate is C12H22FeO12.2H2O.

Ferrous gluconate, then, has a molecular weight of 482. From the formula, we identify that only 1 molecule of iron i.e. 56 parts of the 482, consist of it. We use proportional sets to calculate the equivalent quantity of iron in ferrous gluconate.

We can also resolve this problem using proportional sets:

Answer – we estimate molecular weights for quinine bisulphate and quinine dihydrochloride as 548 and 395 respectively.

The mole is the SI unit for the amount of a substance. This ‘substance’ can be atoms, molecules or ions. Two examples help to illustrate the point:

If 1 mole of a substance is dissolved in a solvent and the resulting solution is made up to 1L, this solution is referred to as a molar solution and expressed as 1 mol/L or 1 mol L-1.

For example: if we dissolve 58.5g of NaCl into water to produce 1L, we have made a 1 mol/L aqueous solution of sodium chloride.

Calculations involving molecular weights and moles don’t need to be difficult. Once you grasp the basic concepts, the questions become that much easier to work out.

Example 7
Calculate the number of moles of chloride ion in 500mg of calcium chloride?

Example 8
Calculate the number of moles of water in 500mg of CaCl2.6H2O?

This molecule has a molecular weight of 219 – contains 6 moles of water (stated in the formula). Don’t forget to convert 500mg to grams:

Example 9
How many moles of solute are there in 20mL of a 1 mol/L solution?

Example 10
How much NaCl is needed to make 25mL of a 0.5 molar solution? How many moles of sodium ion will be in the final solution?

Again, let’s tabulate the data within a proportional set:

Answer – 154 millimoles of both sodium and chloride ions are contained in 1L of sodium chloride infusion BP.

Using this information, we can now set up a proportional set.

In another article, we covered the theory behind moles, molecular weights and Avogadro’s number – an article that complements much of what you have learned here. For now though, there are a few take home points to consider. First, you should have a solid idea of what we mean by molecular weights and moles.

If you’re still not sure – keep practicing! Without practicing any pharmacy calculations, you’re doomed to fail. With the right approach, you can ace these questions in your next pharmaceutical calculations exam!