Penicillins Pharmacology | All the Facts in One Place! 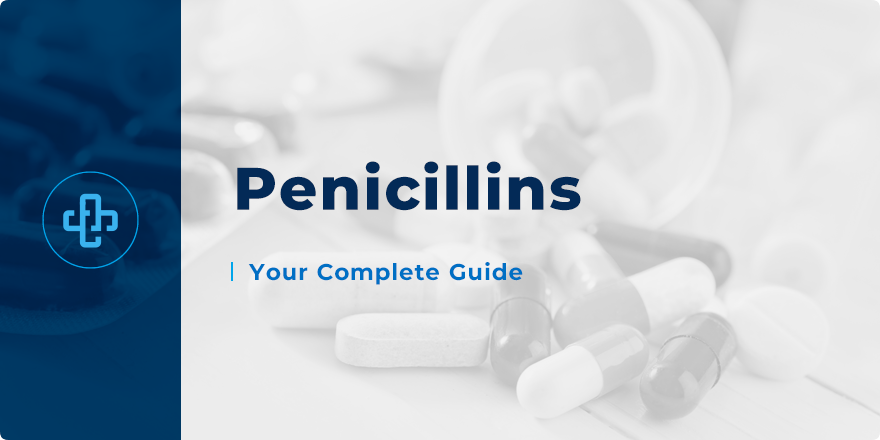 Penicillin was discovered in 1928 by the Scottish microbiologist, Alexander Fleming, though it wasn’t until 1942 that these medicines were used publicly. The class has since gone on to become one of the most widely used antibacterial drug classes.

The onset of bacterial resistance has dampened their therapeutic potential, though they remain widely used in the clinical setting.

There are many different penicillin classes:

Below, we go through each of these classes in turn – identifying their indications and spectrum of activity. Later, we review penicillins pharmacology in more detail – focussing on their mechanism of action, side effect profiles and drug interactions.

Flucloxacillin is a prominent example.

As a narrow-spectrum antibacterial drug, flucloxacillin is used to treat Gram-positive infections such as:

Flucloxacillin may also be used to prevent infections developing during surgery.

The antipseudomonal activity of piperacillin derives from its chemical structure. Unlike many other penicillins, piperacillin (and other ureidopenicillins) have a polar side chain incorporated into the molecule; a side chain that can penetrate Gram-negative organisms, including Pseudomonas aeruginosa.

Infections treated by piperacillin with tazobactam (beta-lactamase inhibitor) include:

Piperacillin cannot be absorbed orally. It is administered via the IV or IM route.

Broad-spectrum penicillins include amoxicillin and ampicillin. Their indications include:

With these indications in mind, let’s now turn to penicillins pharmacology – how the drugs work to exert their therapeutic effects.

Penicillins have a common mode of action.

That’s where the beta-lactam ring comes in.

The four-membered ring binds to the enzyme DD-transpeptidase; the enzyme needed to catalyse cross-link formation. As a result, the integrity of the cell wall becomes compromised which, in the end, causes the bacterial cell to wither away and die.

As we learned, penicillins come with different spectrums of activity. Some, such as flucloxacillin, are narrow-spectrum drugs whereas others, such as piperacillin, have activity against Pseudomonas aeruginosa. These differences relate to the ancillary structures and R-groups attached to the compound.

The relationship between structure and activity is very important.

Beta-lactamase is an enzyme that breaks down the beta-lactam ring.

Many penicillins are susceptible to beta-lactamase, rendering redundant the drug’s antibacterial potential. However, several inhibitors of beta-lactamase have since been developed – compounds that combat this widespread form of bacterial resistance.

They have little to no antibacterial activity themselves, but they prevent degradation of the beta-lactam ring and, to that end, contribute to a wider antibacterial effect.

Use of beta-lactamase inhibitors is important for Gram-negative infections. That’s because most resistance from Gram-positive organisms comes from variations in penicillin-binding proteins.

Penicillins are broadly associated with the following side effects:

Generally, though, penicillins are well-tolerated drugs.

When we talk about the clinical pharmacology of penicillins, we need to think about the following factors:

Penicillins remain an important class of medicines. They are used to treat mild to serious bacterial infections and have, for over 70 years, added considerable value to the clinician’s toolkit.