PDE5 Inhibitors Pharmacology | All the Facts in One Place! 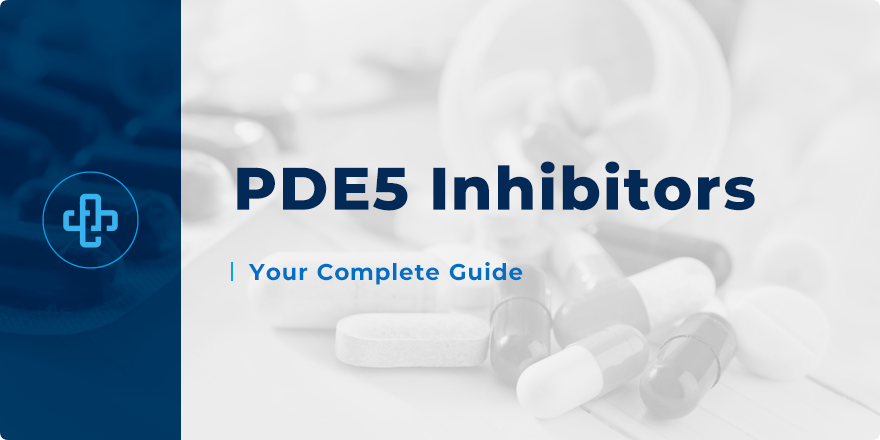 Phosphodiesterase type 5 inhibitors – or PDE5 inhibitors – are used in the treatment of erectile dysfunction and primary pulmonary hypertension. Here, we review the essential pharmacology that you need to know.

Examples of PDE5 inhibitors include:

The original PDE5 inhibitor – sildenafil – was discovered as a potential treatment option for angina pectoris.

Phosphodiestesterase type 5 is an enzyme predominantly found in the smooth muscle of the corpus cavernosum of the penis and the arteries of the lung.

As nitric oxide binds to guanylate cyclase receptors, it increases levels of cGMP. Greater levels of cGMP are linked to smooth muscle relaxation in the penile gland and the arteries of the lung.

By preventing degradation of cGMP, PDE5 inhibitors lead to greater vasodilation in both the penile gland and the arteries of the lung.

Side effects associated with PDE5 inhibitors include:

In a small number of cases, prolonged erections – priapism – may occur, which is considered a medical emergency.

When we talk about the clinical pharmacology of PDE5 inhibitors, we need to think about the following factors:

PDE5 inhibitors pharmacology means understanding how the drug works not only at the penile level, but in the body as a whole. Inhibiting PDE5 has significant bodily effects and this becomes more serious when you consider potential drug interactions.