How to Pass Your Pharmacology Exam First-Time Around! 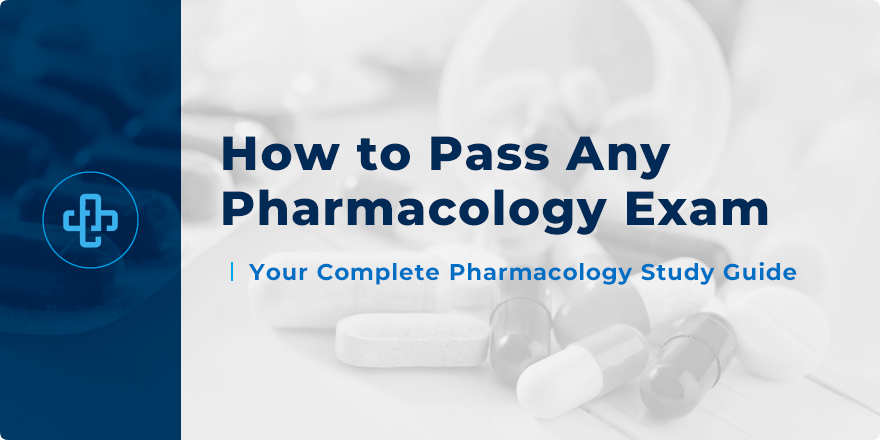 Pharmacology can be confusing, particularly when you first encounter the subject.

With a seemingly never-ending stream of drug names, side effects, drug interactions and mechanisms of action – where does it end? It can be difficult to find method in this maelstrom of medicinal madness, but it is possible. There are effective strategies you can apply to your study to ensure you pass your pharmacology exam first-time around. In today’s chapter of our pharmacy blog, that’s precisely what we review.

Whether you’re a pharmacy, nursing, medicine or pharmacology student – you’re all in the same boat. Without the cognitive paddles to hand, you’re doomed to sink down and down that grades timetable. Nobody wants that, let alone you. If you’ve previously failed a pharmacology exam – or other clinical test such as the NAPLEX exam or NCLEX – it may be time to take a step back and review where you’re going wrong.

We hope that, through the strategies we discuss here, that you discover what your Achilles heel is and how best you can get back on your feet.

First things first, you need to put pharmacology in perspective.

This means knowing what to learn and what not to learn. Of course, this depends upon what pharmacology exam you’re sitting – but the core principal applies nonetheless. If you attempt to learn every fact about every medicine, almost haphazardly, you’re inevitable going to fail (unless, of course, you have a photographic memory). It’s unreasonable to assume that you have the necessary recall for this task. Instead, you need to put pharmacology in perspective and know what to learn.

This begins by appreciating the link between drug class, mechanism, side effects and drug interactions.

The mechanism of action of a drug-drug class explains how the drug works.

Take SSRIs, for example. These drugs are predominantly used in the treatment of depression. Some members of this class do, though, a diverse mechanism of action – that is to say, they have agonist and antagonist activity at a wide spectrum of receptors. Sometimes this list of receptors exceeds well over a dozen. It’s not necessary for you to recall this level of detail, though.

You don’t need to know the specifics of specifics of each mechanism of action. If a question were to appear, it would be on something specific – but something that had notable clinical and mechanistic consequences.

Learning mechanisms of action is important, then. From the mechanism, you begin to understand why certain side effects and drug interactions happen. Suddenly, the subject of pharmacology becomes less and less arcane.

For example, once you understand that ACE inhibitors, such as Ramipril, result in the accumulation of kinins in the lung, the side effect of “persistent, dry cough” suddenly has relevance. Once you know how anticholinergics affect the neurotransmitter acetylcholine, both in the central and peripheral nervous system, it demystifies why the side effects of dry mouth, pupil dilation and urinary retention occur.

Try, then, to coordinate your learning:

Don’t see “mechanism of action”, “side effects” and “drug interactions” as separate phenomena. Instead, see them as interwoven elements that influence how the drug interacts with the body and other medicines.

The same principal that applies to “mechanisms of action” also holds true with side effects and drug interactions.

Side Effects and Drug Interactions

Take statins, for example. Statins – members of which include atorvastatin and simvastatin – are used to lower levels of cholesterol. They achieve this by interfering in the cholesterol pathway – more specifically by inhibiting the enzyme, HMG-CoA reductase, that’s involved in the metabolic pathway that leads to cholesterol production. If you review the potential side effects of statins, though, you discover a bewildering list that extends well into the hundreds.

But you do not need to recall the entire list. It’s a pointless exercise in futility.

Instead, you should recall the side effects that “stick out”, that are distinct to statins and which have been consistently flagged up as “problem side effects”. In the case of statins, we don’t list “nausea, vomiting and diarrhea” – these are non-specific symptoms that apply to just about every medicine. Instead, we talk about rhabdomyolysis; a serious, potentially fatal condition caused by muscle breakdown and one that can lead to significant kidney dysfunction. In an earlier post, we tabulated medicines and their notable side effect associations. Take 2 minutes to revise.

Ciprofloxacin interacts with many, many drugs. According to Drugs.com, there are over 140 serious drug interactions alone! Of course, you’re not expected to learn every major interaction, but you should know the “standout” drug interactions at the very, very least. In the case of ciprofloxacin, it is well-known to heavily interact with a muscle relaxant called tizanidine. Such is the seriousness of this drug interaction, that the two drugs are contraindicated to be taken together.

Again, titrate your focus to the “standout” drug interactions for each drug class (sometimes, a single member of a given drug class though) – and, once that foundational web of drug interactions has been built, you can build upwards and branch outward with ease. It may take time but, in the end, it works.

In this way, your study of pharmacology becomes much more focused. You now understand that you do not need to learn the specifics of specifics of specifics. Your study is no longer random. Instead, you need to know the fundamental structure of the topic in question. You begin to understand, more and more, what level of detail to include and what detail to eschew. Your study then becomes more efficient, more manageable and, ultimately, more effective. Start small and build-up.

But the strategies you need to adopt don’t stop there.

To pass your pharmacology exam first time around, you also need to know the difference between generic versus proprietary names.

Proprietary names are brand names or trade names. In contrast, generic drugs are not brand-specific but carry the same indications, efficacy, mechanism of action and other medicinal features. For instance – omeprazole is a generic drug sold under the proprietary names of Prilosec and Losec (among others). At this point you might be asking yourself the question – why is this distinction between generic and proprietary important?

The answer is that this distinction opens a wider door of learning opportunity.

That opportunity lays in the prefix, root or suffix of the generic drug.

Drugs are not categorized in isolation. Invariably, they are members of a wider family of drugs – all of which contain a unique prefix, root or suffix. From these features, we can work backwards and infer the medicines:

That’s quite the inference! Detail we can infer from the prefix, root, or suffix of the drug in question.

To illustrate this, let’s examine omeprazole in more detail.

Omeprazole belongs to the proton-pump inhibitor (PPI) class of medicines. PPIs are used to treat conditions caused by excessive gastric acid production. Every member of the PPI class has the same suffix, namely -prazole. Even if we never saw the drug pantoprazole, for example, we would then be able to infer the following details about the drug:

Being able to recognize prefixes, roots and suffixes is, then, very important. These grammatical features allow you to connect, dot-by-dot, the various features of a given drug class. We examined medicinal prefixes and suffixes in an earlier post. We recommend committing this table to memory. Though the table is not exhaustive, it helps you identify which drug classes you’re familiar with and which ones you’re unfamiliar with.

This Segway’s neatly onto our next strategy – namely, the need to illustrate and structure your pharmacology study.

To pass your pharmacology exam first time around, you need to spend your time wisely. To be efficient involves applying the right strategies to your study.

Few students read vast swathes of a dense pharmacology textbook, digesting everything they need to know. Most students do not have this mental luxury. That doesn’t mean, though, that these students are forever doomed. By structuring your pharmacology study the right way; in a manner that ensures you absorb more, more often – you can catch up, if not perform better, than the students who take their excellent memory for granted.

Some students are visual learners, others are auditory. What works best for one person does not necessarily work for another. You need to experiment; discovering what method works best for you. It may even involve a combination of methods, one method bouncing off another in a synergistic, complementary manner. One of the most popular study methods is to construct pharmacology flashcards or mnemonics. Both methods re-structure your study, both highlighting the essential facts you need to know.

If you have never experimented with flashcards or mnemonics, now might be the time to try. As with any experiment, set aside a control and a variable:

In 24 hours, test your knowledge of both topics. Learn what worked and what didn’t and move forward. If you’ve never experimented with study methods, you’ll never know if you could have enhanced your grades more. You can’t assume that your existing study methods are, by default, the best. Chances are they’re not. When it comes to creating pharmacology flashcards, think about the following factors:

A third, and ever-growing, method of learning pharmacology is to create stories.

While this might sound bizarre, it has the capacity to work very, very well. It involves creating imaginative stories that link one essential fact to another – “link” being the correct word because this system of learning is known as the link method. Again, the more bizarre the story, the more memorable the story will be. You are more likely to recall facts from a memorable story than you are from a dry, uninteresting list.

Bringing it all together

Keep the following factors in mind:

When combined with our earlier analysis of what detail to focus on and how to approach each drug class, the memory methods outlined above augment and enhance your study further. No two learners of drugs and medicines memorize the subject in the same way. It invariably involves a mix-and-match approach. Whether you’re wondering how to pass the NAPLEX exam, NCLEX test or any other clinical pharmacology exam – the same principles apply.

By building efficiency into your study and knowing how to structure each drug class, the rewards (and grades!) will come thick and fast. If you think you can pass your pharmacology exam by “winging it” – think again! You’ll be overcome by a vast blizzard of facts, without any meaningful connection, which dilutes the grade you’re likely to receive while also setting you behind your class in the months and years ahead as more advanced pharmacology comes your way.

Stay ahead and your study becomes easier!

Check back to our pharmacy blog soon for even more great study tips on pharmacology, clinical pharmacy and medicine. You can also register with PharmaFactz today to receive instant access to hundreds of quiz questions, flashcards, infographics, tutorials, guides and fact generators – helping you pass your pharmacy test with even greater efficiency!