Opioids Pharmacology | All the Facts in One Place! 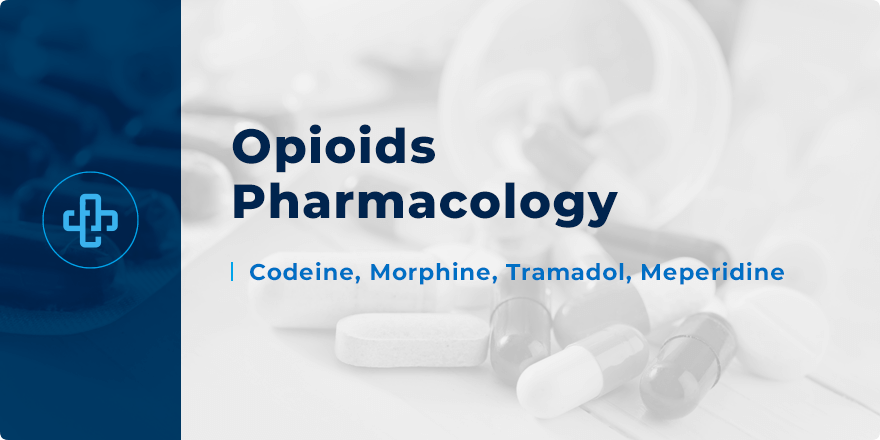 Opioids are an important class of medicines. They are predominantly used in the treatment of pain – mild, moderate and severe – depending on which opioid is prescribed and for what indication.

We are going to examine opioids pharmacology according to the following classification:

Of course, this list is not exhaustive. Nonetheless, it breaks opioids into a convenient and helpful classification from which we can build further our knowledge of opioids. Today’s guide serves as a mere introduction to what is a vast and clinically complex topic. With this in mind, let’s turn our attention to the indications that opioids are used to treat.

Opioids are used in the treatment of the following conditions:

With these indications in mind, let’s learn more about opioids pharmacology – how they work to produce a therapeutic impact.

However, activation of mu-opioid receptors has many other effects. For example – they reduce respiratory drive through receptor activation in the medulla; an effect which leads to the potentially fatal respiratory depression (see below).

Activation of opioid receptors in the chemoreceptor trigger zone (CTZ) induces an emetic effect, too.

Some weak and moderate opioids come with differing mechanisms of action.

For example – codeine and dihydrocodeine are metabolized in the liver, producing relatively small quantities of morphine (from codeine) and dihydromorphine (from dihydrocodeine). These metabolites are stronger agonists at mu-opioid receptors than parent compounds. In contrast, tramadol also works as a serotonin-norepinephrine reuptake inhibitor (SNRI). It is not known to what extent this activity influences its analgesic effect.

Some patients are deficient in the metabolizing enzyme, CYP2D6 (approximately 10 percent of Caucasians). This enzyme is involved in the metabolizing certain opioids – such as codeine, dihydrocodeine and tramadol – into their therapeutic metabolites.

Opioids are associated with their own range of potential side effects. Side effect risk depends upon which opioid is chosen and the route of administration through which the drug is taken, among other factors.

For example – compound preparations are associated with relatively mild effects such as constipation, drowsiness and nausea whereas IV morphine is associated more with serious effects, such as respiratory depression.

Side effects linked to opioids include:

The last two are pronounced in overdose.

Tolerance and dependence remain very real risks, too – particularly with long-term use of stronger opioids. Tolerance refers to the need to administer higher doses to meet the same therapeutic effect as earlier doses. Dependence occurs on cessation of opioid use, where withdrawal effects take over.

When we talk about the clinical pharmacology of opioids, we need to think about the following factors:

Opioids remain an important drug class in pain management – both for acute and chronic pain management. There are many opioids, each with their own range of indications and clinical recommendations. We recommend using this guide as an introduction to what is a difficult, if more complex clinical topic.

Want to learn more about opioids pharmacology? Register with PharmaFactz today to receive instant access to all the resources you need. In the meantime, take a few moments to join our pharmacy blog newsletter (above) to receive all the latest facts direct to your email!