NSAIDs Pharmacology | All the Facts in One Place! 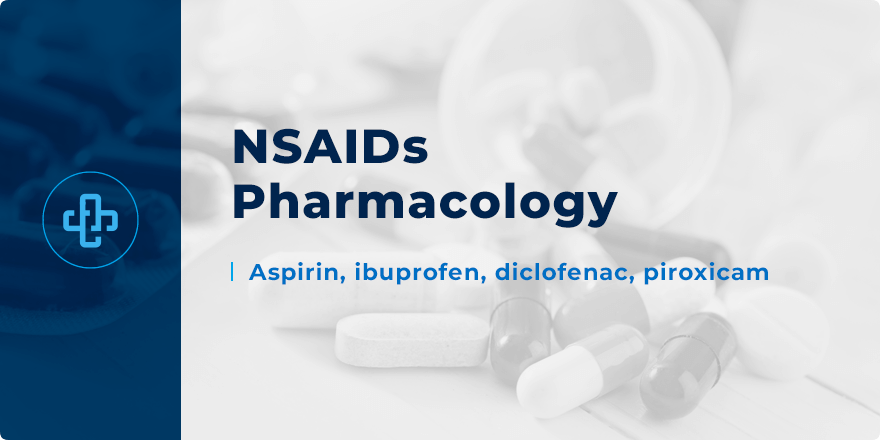 NSAIDs are non-steroidal anti-inflammatory drugs – medicines predominantly used in the treatment of pain, fever and inflammation.

Though NSAIDs are effective at treating these specified indications, they are also linked to a wide array of serious side effects and manifold drug interactions – many of which we explore below.

First though, let’s quickly review what NSAIDs are used to treat before going on to learn how NSAIDs achieve their desired therapeutic impact.

There are also other medicines – such as etoricoxib – which are licensed in the EU but not in the United States. Other drugs, such as rofecoxib, have been withdrawn wholesale from both the EU and US due to a substantial increased risk in serious cardiovascular events, such as myocardial infarction and stroke.

Let’s take a few minutes to review NSAIDs pharmacology – how they work to induce their therapeutic impact.

NSAIDs work through inhibition of the cyclooxygenase enzyme (COX). There are two types of COX isoenzyme – both of which play a markedly different biological role:

Therapeutic benefits of NSAIDs come about principally through inhibition of the COX-2 enzyme – though there is some degree of overlap between the two isoforms.

How does COX produce pain and inflammation?

As an enzyme, COX catalyses the formation of pro-inflammatory mediators – such as prostaglandins and thromboxanes – from arachidonic acid; a mechanism first expounded by the English pharmacologist, Sir John Vane (who, incidentally, was co-awarded the Nobel Prize in Physiology of Medicine in 1982).

Of course, NSAIDs pharmacology doesn’t stop there. After all, NSAIDs are used to treat more than inflammation; they’re also used to treat pain and fever too.

NSAIDs inhibit phagocytosis of urate crystals – helping explain why they are effective in the treatment of pain caused by acute gout.

NSAIDs are associated with their own range of side effects – some minor, many serious.

Side effects with NSAIDs include:

This summary of potential side effects is by no means exhaustive, but it highlights the many serious clinical implications that come with NSAID use – many implications we explore below.

When we talk about the clinical pharmacology of NSAIDs, we need to think about the following factors:

Though these clinical considerations are not exhaustive, they demonstrate how careful clinician’s must be when prescribing NSAIDs. Due to their impact on the gastrointestinal, cardiovascular and renal systems, there are omnipresent clinical factors to consider. Nonetheless, when accurately prescribed, NSAIDs remain an invaluable drug class in the clinician’s toolkit.

Want to learn more about NSAIDs pharmacology? Register with PharmaFactz today to receive instant access to all the resources you need – tutorials, quizzes and more. In the meantime, join our newsletter (above) to receive all the latest facts direct to your email.