This section follows on from our overview of medicinal chemistry by focussing its attention on lead identification in modern drug discovery. In this regard, the article is going to look at the stages of drug development as well as the possible sources of lead compounds and novel drugs in modern times.

Drug discovery and development is mainly concerned with enhancing the properties of drugs that are in clinical use and developing novel ways of treating medical conditions. Getting a drug into the market generally takes over a decade and involves many individuals with different expertise from a broad range of disciplines. The main stages of modern drug discovery are outlined below. In general, medicinal chemists are heavily involved in stages 4 to 6.

During the early stages of drug discovery for a certain disease, the underlying molecular mechanisms behind the disease are studied. These studies include identifying the cellular and genetic factors involved in the disease, followed by the identification of potential targets. In order to ensure that the biological target is involved in the disease, in vitro (isolated cells) and in vivo (animal models) tests are performed. This is also known as the target validation stage. Modern target validation often involves a combination of in vitro, in vivo, and in silico (performed with a computer) studies. The results of the target validation stage can assist in lead compound identification.

Lead compounds are chemical compounds that show desired biological or pharmacological activity and may initiate the development of a new clinically relevant compound. Lead compounds are typically used as starting points in drug design to give new drug entities. Drug design strategies can be used to improve the compound’s pharmacodynamic and pharmacokinetic properties.

The resulting compounds from drug design go through a series of preclinical studies and become clinical candidates if the compounds don’t exhibit adverse effects or toxicity during in vitro and in vivo studies. After going through marketing obstacles and clinical trials, compounds that pass are released on the market as new drug entities. New drug entities are generally monitored for safety after their release on the market. This is known as postmarketing surveillance or Phase IV clinical trials.
Possible sources of lead compounds and novel drugs include: 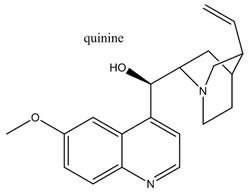 Plants are rich sources of small molecule pharmaceuticals as well as lead compounds. The antimalarial drug, quinine, is isolated from the bark of the cinchona tree.

Methadone, a compound used to treat opioid dependence is a structurally simpler acyclic analogue of the opioid analgesic, morphine. Morphine is the most abundant opiate derived from opium which is the dried latex acquired from Papaver somniferum (opium poppy): 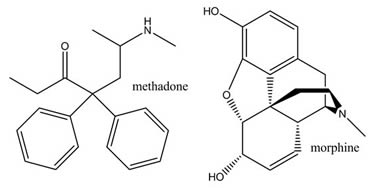 Epibatidine is a potent analgesic isolated from the skin of epipedobates tricolor (phantasmal poison frog). Epibatidine is several hundred times stronger than morphine. However, the therapeutic dose of the compound is close to the toxic dose, driving the development of synthetic analogues. Epibatidine serves as a lead compound for potential novel analgesics. To date, synthetic analogues have not reached clinical use. 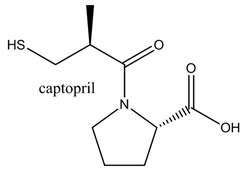 Teprotide is a nonapeptide isolated from the venom of bothrops jararaca (Brazilian pit viper). It is a known inhibitor of the Angiotensin Converting Enzyme (ACE). Teprotide was used as a lead compound for the development of the ACE inhibitor, captopril.

Penicillins were discovered by serendipity from penicillium fungi. Derivatives of natural penicillins with improved activity such as the broad spectrum antibiotic ampicillin, have been developed.

The fungal compound, lovastatin was one of the compounds that served as the lead for the development of other statins (HMG-CoA reductase inhibitors). Lovastatin is produced by several species of fungi such as the common edible mushroom, pleurotus ostreatus (oyster mushroom). 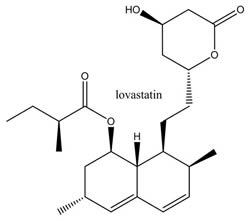 A lead compound may be found in chemical libraries. Libraries can be searched for possible leads through high throughput screening methods. The associated database that stores the library’s information can also provide useful information. Through computerised searching methods, lead compounds may be found.

Computers have also been used to design novel drugs. For instance, if the 3D structure of a protein has been resolved though X-ray crystallography, it is possible use molecular modelling software packages to study the binding site of the macromolecule. In silico, molecules can be designed that is able to fit and bind to the binding site. Crystallographic studies and computational methods were used in the development of the anti-influenza drug oseltamivir, as well as the anti-hypertensive drug, aliskiren.