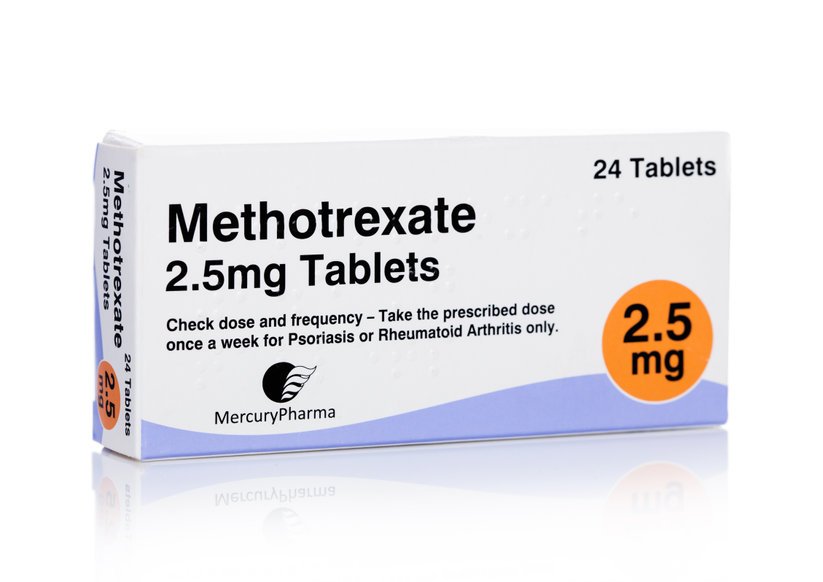 Here, we review the must-know facts about methotrexate pharmacology; an important drug that carries with it significant risks that healthcare professionals must be cognisant of. In this review, we learn more about the drug’s indications, mechanism of action, side effects, and clinical pharmacology.

Methotrexate, formerly known as amethopterin, is a drug used to treat a wide variety of conditions. First introduced as an anticancer agent in the 1940s, MTX quickly went on to become a staple drug in the treatment of autoimmune disorders such as psoriasis and rheumatoid arthritis. However, methotrexate use is not without risk. It comes with a whole panoply of adverse effects – many of which we list below.

Methotrexate is used to treat conditions such as:

Whether the drug works as an immunosuppressant DMARD or as an antineoplastic agent depends on its mechanism of action, as it does not work the same for both indications.

Methotrexate works through a variety of means, depending on which indication it is being used to treat.

For cancer chemotherapy, methotrexate – or MTX – is used as a folate antagonist.

More specifically, MTX works to inhibit dihydrofolate reductase, an enzyme required for the production of folic acid-intermediaries that are needed for DNA replication and protein synthesis. MTX is most effective in actively dividing cells, hence its advantage as an anticancer drug.

For treating autoimmune disease, though, MTX acts through a different means. MTX has both anti-inflammatory and immunosuppressive properties – not least mediated through its inhibition of interleukin-6, interleukin-8 and TNF-α.

Methotrexate is associated with a series of common and serious side effects.

Common side effects associated with MTX include:

Methotrexate is also associated with more serious side effects such as hepatic cirrhosis, pulmonary fibrosis and neutropenia.

As methotrexate must be taken once weekly, there are often cases of accidental overdose where the patient has instead taken the medicine daily – a toxic dose that can lead to seizures, coma, renal failure and death.

Folinic acid can be used to reverse the effects of methotrexate overdose.

When we talk about the clinical pharmacology of methotrexate, we need to think about the following factors:

Methotrexate continues to remain a highly effective drug in the treatment of cancer and autoimmune disorders. However, it is also associated with significant risks – many of which we have outlined here. Healthcare professionals should continue to remain vigilant in prescribing and dispensing this medicine to patients.

That concludes our rapid revision of methotrexate pharmacology! Check back to our PharmaFactz blog soon for more exclusive content to help you master the science of drugs and medicines!