This section is a continuation of the article on Drug Targets. The following article will provide an introduction to enzyme kinetics from a medicinal chemistry perspective.

Enzymes are biological macromolecules that act as catalysts in biochemical reactions. The metabolic processes and chemical reactions that sustain life often involve enzymes. Enzymes basically decrease the Gibbs free energy of activation (ΔG‡), accelerating the rate of reaction. The majority of enzymes are proteins, and proteinaceous enzymes will be the focus of this section. Catalytic RNA molecules are also known and they are referred to as ribozymes. Just like other proteins under normal conditions, proteinaceous enzymes adopt certain three dimensional conformations that are crucial to their activity. Enzymes sometimes recruit other organic molecules or inorganic cofactors which may be essential to catalytic activity. An enzyme’s substrate is the molecule upon which enzymes act. In biochemistry, the suffix -ase is used to name the majority of enzymes.

As drug targets, enzymes are highly important. Enzyme inhibition has many applications. Many enzymes can be inhibited to treat a vast range of medical conditions. HMG-CoA reductase inhibitors as an example were described in a previous article. Other examples of drugs that act on enzymes include the antimalarial compound pyrimethamine (dihydrofolate reductase inhibitor), clavulanic acid (β-lactamase inhibitor), and the antineoplastic agent lapatinib (dual tyrosine kinase inhibitor). 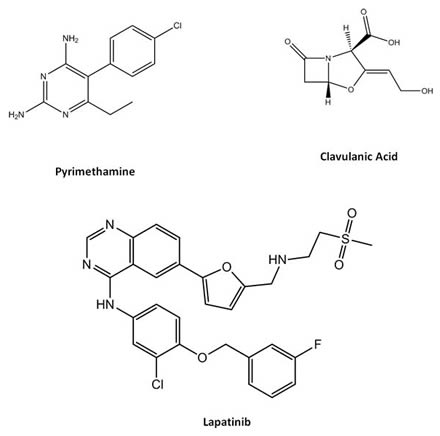 Enzyme kinetics is the study of enzyme-catalysed chemical reactions. Enzymes are highly efficient catalytic systems. Generally, they can enhance reaction rates by a factor of 105 – 1017. Studying the kinetics of enzyme-catalysed reactions can be useful in determining an enzyme inhibitor’s properties. Michaelis-Menten kinetics is a widely known and useful model of enzyme kinetics. The model was named after Leonor Michaelis and Maud Menten, the individuals who described the mathematical model relating reaction rate and substrate concentration [S]. In chemistry, square brackets are often used to denote concentration (for example, [X] means ‘concentration of X’). Square brackets are also used when describing coordination complexes.

It is important to remember that different people may use different symbols or characters in the following equations. Don’t be bothered by this. It is more important to understand the meaning of the equations. If your understanding of basic algebra and chemical kinetics is a little rusty, it would be a good idea to go over those before proceeding.

The rate of enzyme-catalysed reactions is often referred to as enzyme velocity or simply velocity. Note that enzyme velocities are typically reported at time zero. µ mol min-1 is a commonly used unit of measurement for V0. The complex formed between an enzyme and its substrate is referred to as an ES complex (enzyme-substrate complex). The Michaelis-Menten model of enzyme kinetics uses the concept of the formation of the ES complex. Under the model, the enzyme and the substrate form an ES complex. The formed ES complex can either form the product P and regenerate the enzyme, or dissociate back to E and S. The model is expressed in the equation shown below.

The formation of the product (P) from ES is assumed to be irreversible. The reaction rate constants are k1, k2, and k3. 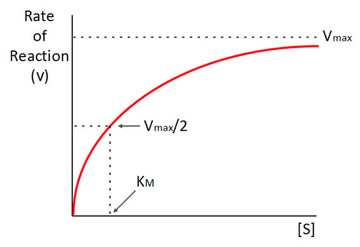 The shape of the curve is hyperbolic. L. Michaelis and M. Menten arrived with an equation that describes the above relationship. The equation is named the Michaelis-Menten equation and is given by:

Note that in chemistry, the lowercase Greek letter ν (nu) is sometimes used to denote the rate of reaction. The derivation of the equation will not be shown here. As seen in the graph, ν increases as [S] increases, asymptotically approaching Vmax. When L. Michaelis and M. Menten derived the equation, a new constant, KM (Michaelis-Menten constant) was defined. KM­ is defined as the concentration of the substrate where the reaction rate is half of the maximum reaction velocity, Vmax. The unit of measurement of KM is M. The magnitude of KM varies widely depending on the enzyme and the substrate. KM is also equal to the sum of k2 and k3 over k1.

Equation of a Straight Line

Extracting the value of Vmax is easier because it is simply the reciprocal of the constant of the equation. Once Vmax is known, KM can be determined from the slope of the line. The x-axis intercept is equal to -1/Km and the y-axis intercept is equal to 1/Vmax. Lineweaver-Burk plots are extremely useful. They can also provide information on the type of inhibition compounds give. 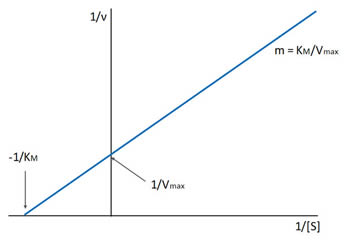 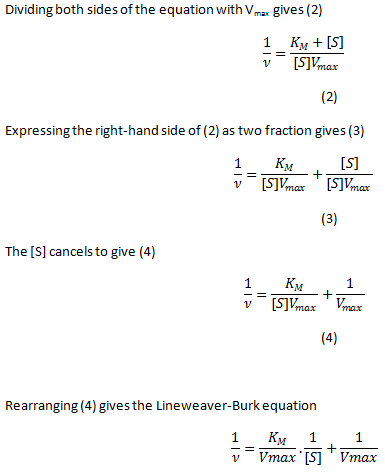 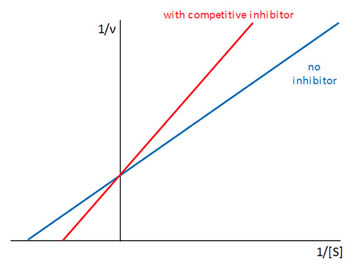 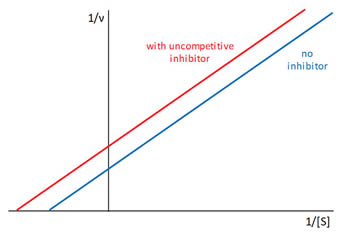 The antidepressant, tranylcypromine is an example of a nonselective noncompetitive, irreversible inhibitor of the monoamine oxidase enzyme (MAO). Tranylcypromine is unable to distinguish between the MAO-A and MAO-B isozymes of MAO. This drug is also used as an anxiolytic agent. 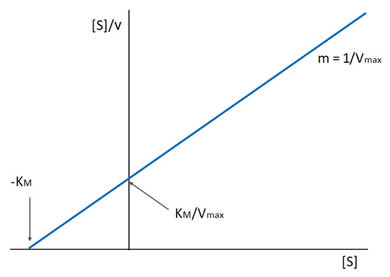 Multiplying both sides of the equation with [S] gives (2) 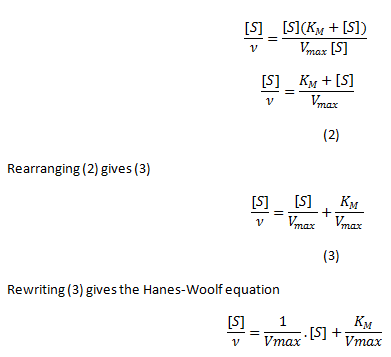 Studying enzyme kinetics can prove beneficial to understanding how drugs work at enzymes. A combination of an understanding of a drug’s mode of action and structure-activity relationships, it may be possible to apply drug design methods to improve drug activity.