We’ve already talked about the medicinal chemistry of opioid analgesics, with a strong focus on morphine. Here, we talk more about the pharmacokinetics of morphine and other, structurally similar opioids. 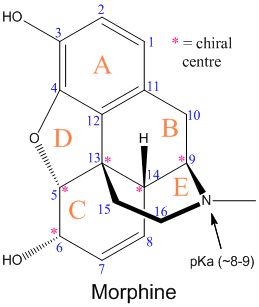 Possible routes of administration for morphine include:

The oral route of administration is most convenient for patients. Morphine readily undergoes first-pass metabolism when taken orally, with only a relatively low percentage of the drug traversing the blood-brain barrier (BBB), reaching target opioid receptors. For this reason,to achieve a similar level of analgesia as parenterally administered morphine, oral doses tend to be six times larger.

The absorption, metabolism and excretion of morphine are summarised below.

Orally administered morphine, which has a basic moiety, is readily absorbed in the alkaline environment of the upper intestine.

Q2) Would you expect the glucuronidated metabolites to readily cross the blood-brain barrier? 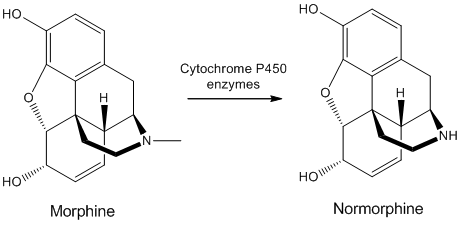 Metabolism rates and efficiency depend on factors such as the gender, age, diet and genetic makeup of the patient. In the case of morphine, which is mainly excreted via urine, 70-80% of a dose of morphine is excreted after 48 h from administration.

The key structural difference between codeine and morphine is at position 3, where in the case of codeine, position 3 has an –OMe methyl ether group.

On the other hand, morphine has a hydroxyl group. Codeine can be thought of as a prodrug of morphine since an O-demethylation metabolism reaction takes place to give morphine, which undergoes many of the biotransformations described above. 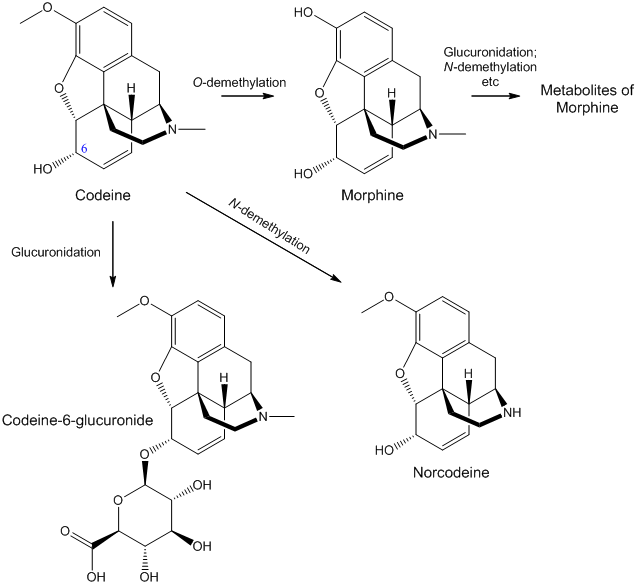 Like we talked about with other opioids, the opioid antagonist naloxone primarily undergoes hepatic metabolism, with a urine-excreted glucuronide metabolite (naloxone-3-glucuronide) as its main metabolite.