Penicillin derivatives, cephalosporins, monobactams and carbapenems all belong to this popular class of drugs. A four-membered lactam ring, known as a β-lactam ring, is a common structural feature of this class (see below). To this day, the pharmacology of beta-lactam antibiotics has clearly bore out an excellent safety and efficacy profile. Most of these medicines work by interfering with bacterial cell wall synthesis; the cell wall being an optimum drug target because it is something that bacterial cells possess, but not human cells.

Penicillin and its Derivatives 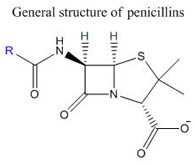 Penicillin consists of a fused a β-lactam ring and a thiazolidine ring; part of the heterocyclic bicyclic system is the β-lactam ring. The bicyclic system confers greater ring strain on the β-lactam ring, an aspect important for activity. An amide and a carboxylic acid group are also present. The carboxylic acid group is a possible site of modification to make prodrugs. Also – note the stereochemistry of the acylamino side chain with respect to the 4-membered ring and the cis stereochemistry for the hydrogen atoms highlighted in green. The key structural features of penicillins can be summarised as follows: 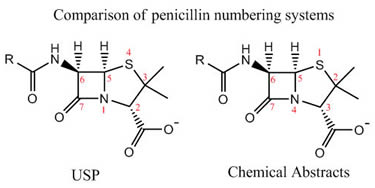 Penicillin’s overall shape is similar to a half-open book. As we talked about earlier, the bicyclic ring system has large, torsional strain and angle strain. Unlike typical tertiary amides, the carbonyl group of the strained four-membered ring is very reactive and susceptible to nucleophilic attack. Think about amide resonance from introductory organic chemistry and its effect on amide reactivity. In the case of the β-lactam ring, amide resonance is diminished. For steric reasons the bonds to the nitrogen cannot be planar; the opening of the four-membered ring relieves strain.

Penicillins can react with amines to form inactive amides. This has implications on co-administration and formulation.

Activity – Can you draw a reaction mechanism for the scheme shown below?

Penicillins are also generally susceptible to hydrolysis under alkaline conditions. Alkaline hydrolysis can be catalysed by the presence of metal ions such as Cu2+.The resulting hydrolysis products do not possess antibacterial activity; this is valuable knowledge for the storage, analysis, and processing of these medicinal chemistry compounds.

Penicillins also tend to be sensitive to acids (see reaction scheme below). Penillic acid is the major product of acid degradation. In the stomach where conditions are acidic, the drug breaks down. Acidic conditions must also be avoided during production and analysis. Penicillins, such as phenoxymethylpenicillin (Penicillin V), have enhanced acid stability as they have electron withdrawing R groups. 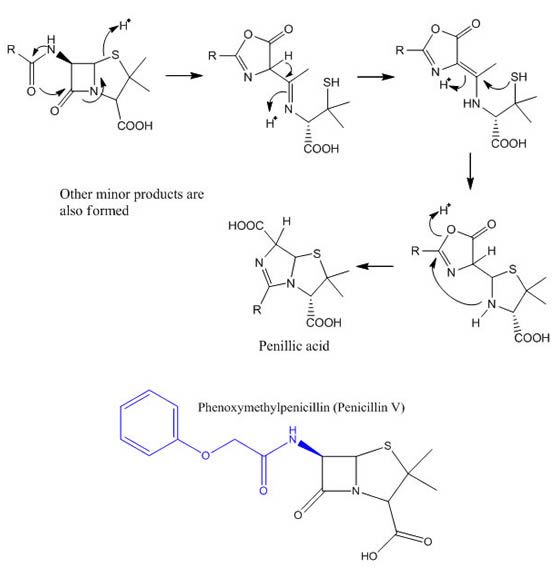 Like many other drugs, penicillins face enzyme-catalysed degradation in vivo. Amidases catalyse the conversion of the C6 amide to an amine. Amidases are useful in industry for the production of 6-Aminopenicillanic acid (6-APA). This compound is used a precursor for many semisynthetic penicillins.

Drug resistance is also a growing problem.β-lactamases (beta lactamases) are mainly responsible for this.

β-lactamases are serine protease enzymes that act against the β-lactam drugs through a similar mechanism as the transpeptidase enzyme; the bacterial enzyme targeted by penicillin. The mechanism of action will be shown later. 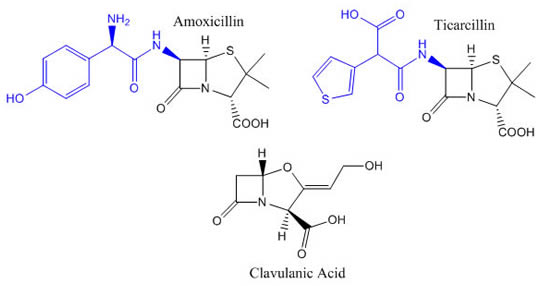 Now lets turn our attention to the synthesis of semisynthetic derivatives.

We briefly mentioned 6-APA earlier. 6-APA is acquired through enzymatic hydrolysis of Penicillin G or Penicillin V, or through traditional organic chemistry. Reaction with an acid chloride at the C6 primary amine allows the synthesis of many semisynthetic penicillin derivatives (try to draw the reaction mechanism as practice!). The free carboxylic acid is, though, a possible site of modification. Ester prodrugs such as pivampicillin were developed to improve the pharmacokinetic properties of their parent drug. Pivampicillin is a pivaloyloxymethyl ester prodrug of ampicillin. 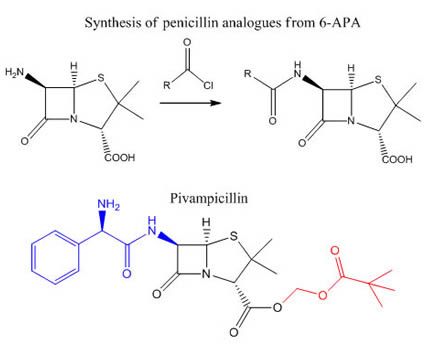 We emphasized the cis stereochemistry of the H5-H6 protons at the start of this beta-lactam review. Generally speaking, the H5-H6 coupling constant (1H NMR) is in the range of 4-5 Hz. 13C NMR studies and DEPT experiments would help distinguish between CH, CH2 and CH3. When studying the IR spectra of penicillins, one must be on the lookout for the carbonyl stretches – particularly for the characteristic β-lactam carbonyl stretch at around 1770-1790 cm-1.

Depending on which penicillin is being studied, the side chain would give characteristic NMR and IR signals.The predicted 1H NMR spectrum of ampicillin is shown below. Note that the spectrum below is merely an estimate. Can you explain why the benzylic protons appear shifted downfield than expected? 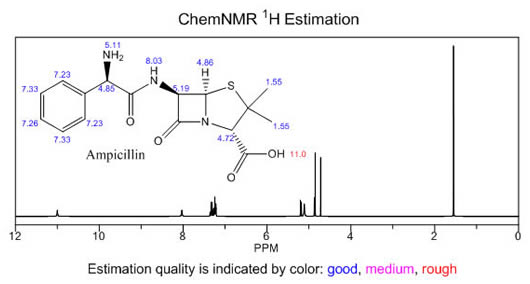 Peptidoglycan (or murein) consists of sugar and amino acid units. This mesh-like polymeric layer outside the inner cell membrane forms the cell wall of bacteria. The sugars N-acetylglucosamine (GlcNAc or NAG) and N-acetylmuramic acid (MurNAc or NAM) alternate, and are connected through a β-(1,4)-glycosidic bond. An amino acid chain is found in each NAM. D-amino acids are also found in these amino acid chains. The sugars are cross-linked via these peptides; cross-linking adding structural integrity to the bacterial cell wall. 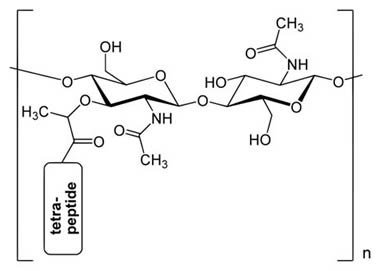 Through the synthesis and studies of many semisynthetic penicillins, the following conclusions were reached.

Variation is mostly limited to the R group of the amide, and, as mentioned earlier, prodrugs have been developed by modifying the carboxylate group. So far, we’ve reviewed the following structural modifications:

We will now consider several other structural modifications.

Gram-negative bacteria possess an outer lipopolysaccharide membrane which surrounds the thinner cell wall. The outer membrane serves as a protective layer against compounds that may pose harm to the bacteria. This partly explains why Gram-negative bacteria are generally resistant to antibacterial compounds. As examined earlier, porins are proteins present in the outer membrane. Water and essential nutrients can pass through these proteins. Small drugs can also pass through porins. The ability of drugs to pass through porins is dependent on their size, structure and charge.

Broad-spectrum antibiotics such as amoxicillin and ampicillin both have -NH2 groups attached to Cα (as shown below); both compounds being orally active. As well as this, the presence of the electron-withdrawing amino group increases acid-stability. Ampicillin is poorly absorbed by the gut due to ionisation of both the amino and carboxylic groups. Oral absorption of amoxicillin is, in contrast, much higher.

Modifications, such as changing the carboxylic acid to esters, were made at the carboxylic group to alleviate this problem. Pivampicillin and bacampicillin are examples of ester prodrugs of ampicillin. The prodrugs undergo metabolism in the body to give ampicillin. Can you remember the names of the enzymes involved in the ester hydrolysis of prodrugs? 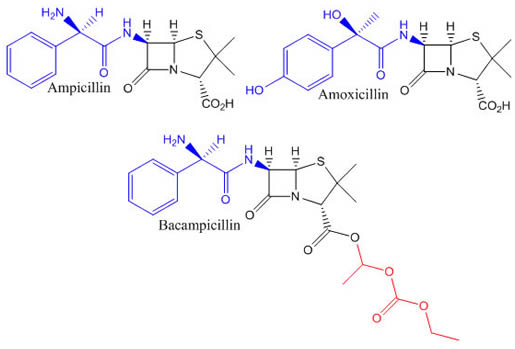 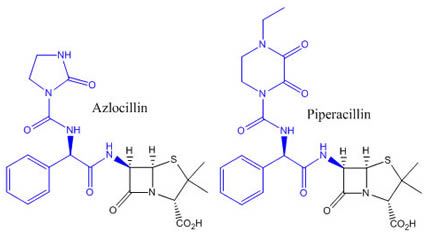 β-lactamases gave bacteria resistance to the traditional penicillins, driving the need for β-lactamase-resistant penicillins. Steric shields may also be used. This strategy involves designing penicillins to resist β-lactamases. By placing a bulky group on the acylamino side chain, degradation of the drug by β-lactamases is minimized. However, if a steric shield is too bulky, the penicillin is not able to bind to transpeptidase.

Methicillin is an example of a penicillin with a bulky group. This semi-synthetic penicillin possesses a dimethoxybenzene R group. Both the methoxy groups of the benzene are at the ortho position. Nafcillin possesses a naphthalene ring in its acylamino side chain which acts as a steric shield. Flucloxacillin contains a bulky and electron-withdrawing heterocyclic acylamino side chain. Thus, flucloxacillin is an acid-resistant, narrow-spectrum, β-lactamase-resistant penicillin. 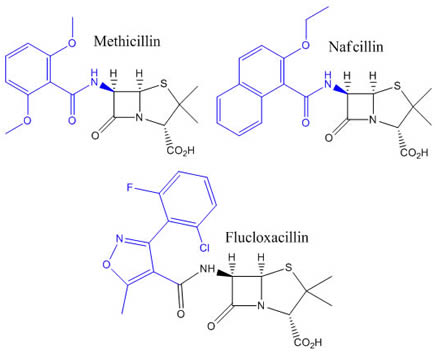 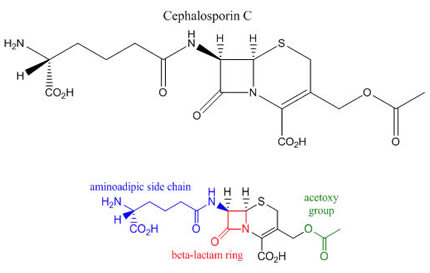 Cephalosporin C was the first cephalosporin discovered from a fungus obtained from Sardinian sewer waters during the mid-1940s. Just like penicillins, Cephalosporin C has a bicyclic system made up of a β-lactam ring fused with a sulfur heterocycle, which, in this case, is the dihydrothiazine ring.The side chain is referred to as the aminoadipic side chain. The acetoxy group of Cephalosporin C is a key feature; a feature examined in more detail later.

Cephalosporin C is less potent compared to penicillins, but this compound has many advantageous properties. Cephalosporin C is more acid-resistant and has a better spectrum of activity, for example. Moreover, the likelihood of causing allergic reactions is considerably less. As a result, cephalosporin C became a useful lead compound for the development of better, more clinically robust antibiotics.

Compared to the penicillins, the ring system strain is not as great, but, like the β-lactam carbonyl of penicillins, the β-lactam carbonyl group of Cephalosporin C is also reactive for similar reasons. Diminished amide resonance and ring strain confers reactivity. The four-membered ring is also susceptible to nucleophilic attack. Cephalosporin C inhibits the transpeptidase enzyme through the mechanism shown below. A serine residue is involved. As shown below, the acetoxy group serves as a leaving group. 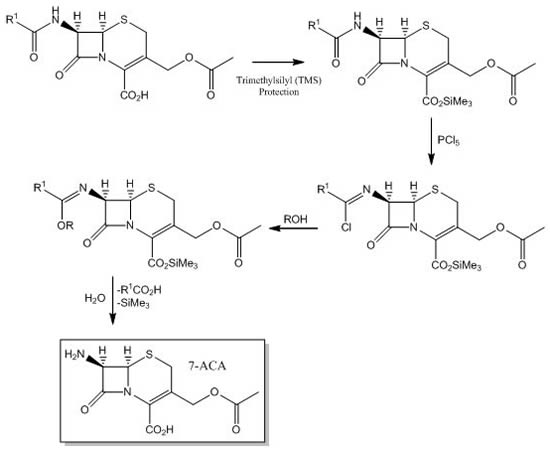 Cephalosporin analogues may be formed by reacting 7-ACA with acid chlorides. 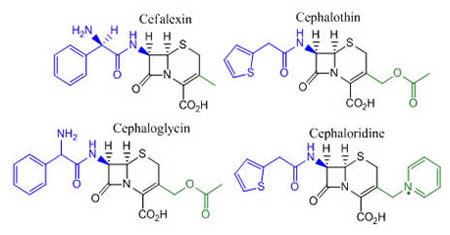 Cefalexin, cephalothin (cefalotin), cephaloglycin, and cephaloridine are examples of first-generation cephalosporins. The methyl group in cephalexin is a poor leaving group, which is bad for activity. However, the use of a methyl group appears to improve absorption. Cefalexin may be synthesized through an acid-catalysed ring expansion of a penicillin. Cephalothin has an acetoxy as a leaving group and a 1-(thiophen-2-yl)propan-2-one in its acylamino side chain. Despite being a good leaving group, the acetoxy moiety is susceptible to enzyme-catalysed hydrolysis. Cephaloglycin’s acylamino side chain is the same as that for ampicillin. Cephaloridine has pyridinium as a leaving group, giving pyridine. Unlike the acetoxy group, the pyridinium is stable to metabolism. 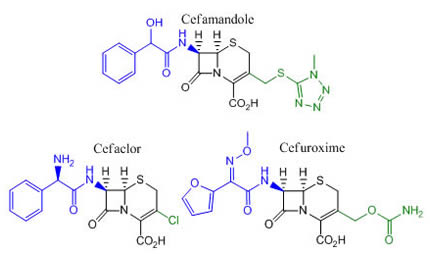 Recall that one of the hydrogens emphasised earlier is a possible site of modification. The methoxy substituted versions are referred to cephamycins. A compound called cephamycin C can be isolated from Streptomyces clavuligerus. A urethane group is present instead of the acetoxy group, enhancing the compounds metabolic stability. Can you explain why?

Derivatives may be synthesised from the methoxy-substituted analogue of 7-ACA, or through reactions with cephalosporins. Note that some refer to cephamycins as a separate class of antibacterial compounds altogether. The cephamycins appear to have greater resistance against β-lactamases. Cephalosporins and cephamycins are sometimes collectively referred to as cephems.

As the name suggests, the monobactams, such as aztreonam ,are β-lactam compounds that are not fused to another ring. Monobactams exhibit moderate activity against certain Gram-negative bacteria in vitro, including Neisseria and Pseudomonas. 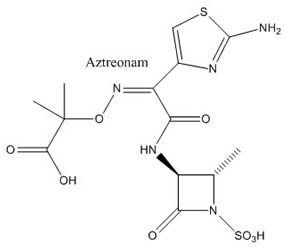 The carbapenem class of β-Lactam antibiotics have broad-spectrum activity and exhibit resistance to many β-lactamases. Carbapenems are used as antibiotics of last resort for infections of bacteria such as Escherichia coli and Klebsiella pneumoniae. Thienemycin is a carbapenem first discovered and isolated from Streptomyces cattleya in 1976. Thienamycin exhibits excellent activity against Gram-positive and Gram-negative bacteria and displays resistance to many β-lactamases. Meropenem and doripenem are analogues of thienemycin and are examples of carbapenems currently in clinical use. Both compounds have been described as ultra-broad-spectrum.

From the structure of the compounds shown, it is easy to see that the carbapenems have some structural features that penicillins do not. The double-bond on the five-membered ring leads to high ring strain. A sulfur atom is also missing in the five-membered ring. The acylamino side chain is absent. Also note the trans stereochemistry of the hydrogens.

This concludes our review of the medicinal chemistry of beta-lactam antibiotics; a subject often featured on pharmacy, pharmaceutical chemistry and other medicinal-related courses. It informs the reader of structure-activity relationships, the development of synthetic derivatives, and how medicinal chemistry relates to broader concepts such as formulation and dosage. The growing problem of resistance is an ever-present challenge for medicinal chemists; a biological mechanism that spurs on the engine of research in this field.