We’ve already talked about the medicinal chemistry of antiprotozoal drugs.

Here, we go one step further – talking about protozoal infections such as amoebiasis and toxoplasmosis.

Toxoplasmosis is the name given to the disease caused by Toxoplasma gondii parasites. The majority infected with T. gondii do not show obvious symptoms. However for pregnant and/or immunocompromised individuals, toxoplasmosis may become a serious medical issue.

Patients can be infected with toxoplasma via:

Infected humans may exhibit flu-like symptoms. Severe toxoplasmosis can cause damage to the eyes and the brain and infants who became infected in the womb may develop symptoms later in life.

Most healthy individuals can recover from infections by Toxoplasma gondii without any treatment. However, pyrimethamine and sulfadiazine, plus folinic acid (leucovorin) may be used. The combination trimethoprim/sulfamethoxazole is an alternative treatment option. 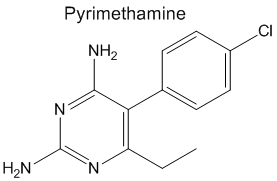 Along with leucovorin, the plasmodial dihydrofolatereductase inhibitor pyrimethamine can be used to treat toxoplasmosis and also cytoisosporiasis; a disease caused by the protozoan parasite Cystoisospora belli. Although there is also antimalarial activity, the use of pyrimethamine alone to treat infections by Plasmodium falciparumis no longer recommended and has declined due to the emergence of drug resistance.As the name suggests, pyrimethamine contains a pyrimidine ring.

Infection by the parasite Trichomonasvaginalis causes a sexually-transmitted disease known as trichomoniasis, which can be treated with the nitroimidazole metronidazole. Metronidazole is a prodrug that can be used to treat trichomoniasis and other protozoal diseases like amebiasis, giardiasis and also infections caused by susceptible anaerobic bacteria. 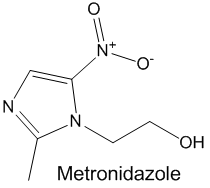 The metronidazole prodrug diffuses into low redox potential environments within the cell of protozoa and susceptible anaerobic bacteria where its nitro group is reduced (note that the reduction involves a single electron transfer). The active, reduced metronidazole radical anion is thought to covalently bind to protozoal or anaerobic bacterial DNA, thus disrupting its helical structure.

Giardiasis (colloquially known as beaver fever) is an infection caused by the parasitic protozoan Giardia lamblia. Giardiasis is transmitted via the fecal-oral route with the ingestion of cysts. One may become infected through the ingestion or imbibition of contaminated food and drink. Some infected individuals do not exhibit symptoms but intestinal symptoms such as diarrhea, flatulence, abdominal cramps and nausea may be observed.

According to the CDC, Giardia-contaminated water may be disinfected by heating it to a rolling boil for more than 1 minute. Nitromidazole drugs such as metronidazole and tinidazole as well as the alternatives nitazoxanide, paromomycin, quinacrine, and furazolidone may be used to treat giardiasis.

Amoebiasis is a disease caused by the protozoan parasite Entamoebahistolytica, with an estimated percentage of 80-90% of infected individuals being asymptomatic. Individuals may become infected by eating and drinking contaminated food and drinks.For those who display symptoms, these include stomach pains and diarrhea and for severe amoebiasis, dysentery with blood.

As we have already discussed, nitromidazole drugs such as metronidazole may be used to treat amoebiasis and the broad-spectrum oligosaccharide antibiotic paromomycin and the amoebocide iodoquinol are possible alternatives. The pharmacokinetics and pharmacodynamics of iodoquinol is not currently fully understood. 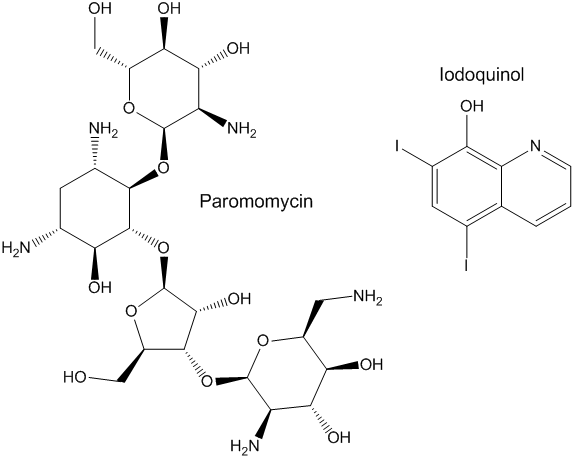 Babesiosis is a disease caused by protozoan babesia parasites, transmitted by the bite of infected sanguivorous ticks. Blood transfusion (infected blood donor to healthy blood acceptor) is another way of becoming infected with babesia parasites. In terms of severity, the intensity of babesia infection can range from asymptomatic topotentially fatal. In general, asymptomatic individuals do not require treatment. However, possible treatments for babesiosis include the combinations: