The term protozoan refers to unicellular heterotrophic eukaryotes and some parasitic protozoans can cause diseases in humans and other animals. Examples of pathogenic protozoans include Plasmodium falciparum, Trypanosomacruzi, Trypanosomabrucei, Giardia intestinalis, Leishmania species and Toxoplasma gondii. Infection by certain species of the protozoan Plasmodium parasite causes malaria in humans.

Examples of drugs used to treat trypanosomiasis include:

Benznidazole is an orally-administered nitroaromatic drug with an estimated Log P of about 1.3 – 1.6. Benznidazole is metabolised by Trypanosome nitroreductases and human cytochrome p450 enzymes. Preclinical research suggests that benznidazole undergoes hepatic metabolism and that the metabolites and a small percentage of the parent drug (~5%) are excreted primarily in the urine.

The trypanocidal parenterally-administered melarsoprol, as shown above, contains a dithiarsolane ring, which is associated with the toxic effects of the compound. Although melarsoprol has been in clinical use for more than 60 years, its pharmacokinetics and pharmacodynamics are still not well understood. Melarsoprol is thought to interfere with protozoan trypanothione synthesis and activity and also interacts with thiol groups of parasite proteins.

Eflornithine (α-difluoromethylornithine or DFMO) is an anti-trypanosomal drug used for the 2nd stage of sleeping sickness caused by T. b. gambiense. Eflornithine can be administered to patients as a combination with nifurtimox. Although given to patients as a racemic mixture, the laevorotatory optical isomer is believed to be the more biologically active one.

Leishmaniasis is name given to the disease caused by protozoan parasites of the Leishmania genus.

Skin sores may heal on their own but would likely result in severe scarring. In contrast, visceral leishmaniasis may be potentially fatal if left untreated. Examples of drugs used to treat leishmaniasis include:

Miltefosine is an orally-administered alkylphosphocholine lipid analog anti-leishmanial drug approved by the FDA in 2014 for treating leishmaniasis (cutaneous, mucosal and visceral). Currently, the mechanism of anti-protozoal activity is not fully understood but several mechanisms have been proposed:

Phospholipase D is mainly responsible for the metabolism of miltefosine, giving choline as well as other metabolites such as phosphocholine and hexadecanol. 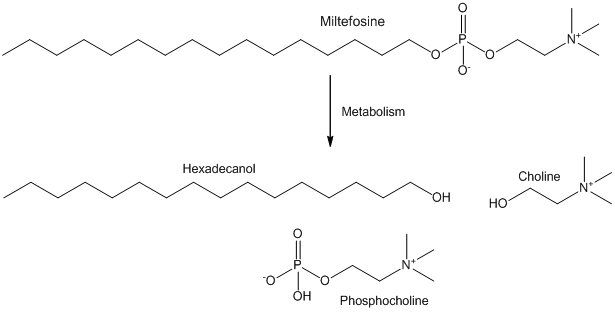 Learn more about the medicinal chemistry of antimalarial drugs.