Histamine is an organic compound involved in many physiological roles and is the endogenous ligand of histamine receptors. Histamine is involved in roles such as local immune response and neurotransmission, as well as stimulating gastric acid secretion. Here, we focus on the medicinal chemistry of antihistamines used for treating allergic response.

There are four known histamine receptors (HR) that are G-protein coupled receptors (GPCR), H1 to H4. The molecule histamine is the endogenous ligand of these.

Histamine consists of an imidazole ring and an aliphatic amino group (an ethylamine side chain). In an aqueous environment, the imidazole ring exists in the tautomeric forms:: 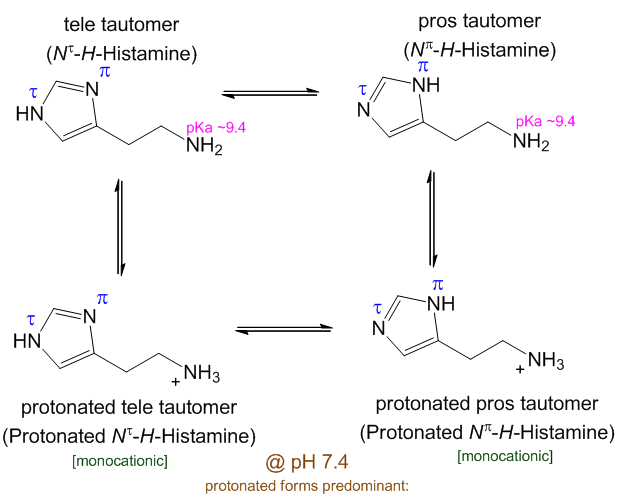 Histamine is bioderived from the naturally-occurring L-amino acid, histidine via a decarboxylation reaction, catalysed by specific decarboxylase enzymes:

Binding of Histamine to H1 Receptors

In the case of H1 receptors, histamine tautomerization is important:

As mentioned earlier, the monocationic form is predominant at physiological pH. The H1 receptor recognises the tele tautomer during initial receptor binding and the key intermolecular interactions are summarised below: 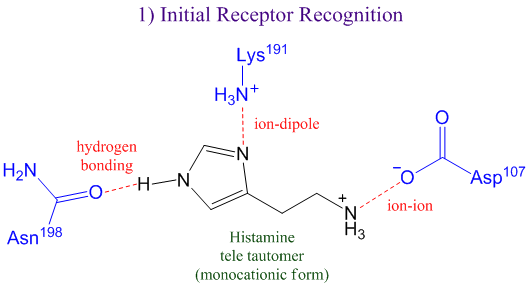 The key intermolecular interactions between the pros tautomer and the H1 receptor binding site are summarized below. Receptor activation occurs at this stage. 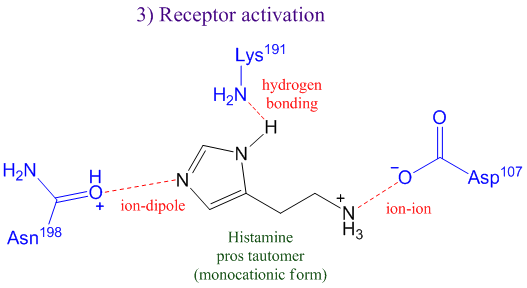 The typical structure of an antihistamine is:

Antihistamines are subdivided as follows: 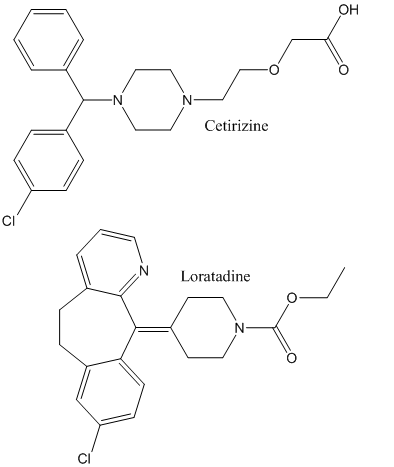 There is approximately 40% homology between the muscarinic M1 and M2 receptors and the H1 receptor. The adverse effects associated with antihistamines, particularly first generation antihistamines, such as blurry vision and xerostomia (dry mouth), are partly due to binding to muscarinic receptors. First generation antihistamines also tend to be lipophilic enough to be able to cross the BBB, allowing for the interaction with central H1 receptors and ultimately leading to sedation.

As mentioned earlier, both cetirizine and fexofenadine have long, flexible aliphatic chains terminating with a carboxylic acidat the amino group that interacts with Asp107. 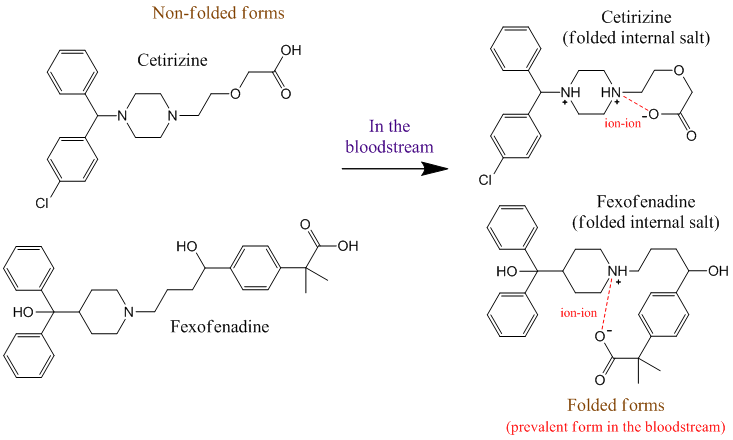 Orally-administered loratadine is well-absorbed in the gastrointestinal tract and undergoes rapid first-pass hepatic metabolism calaysed by cytochrome p450 enzymes CYP3A4, CYP2D6, CYP1A1 and CYP2C19. A major metabolite of loratadine, desloratadine, possesses more potent pharmacological activity in comparison to loratadine. The key difference between loratadine and desloratadine is the absence of an ethyl carbamate-type moiety in desloratadine. Since desloratadine does not readily enter the CNS, it has minimal sedative effects.