What are anthelmintic drugs?

Anthelmintic drugs (or antihelmintic drugs) is the name given to a group of antiparasitic drugs used to treat infections caused by parasitic worms(also known as helminths). People infected / infested with helminths have a medical condition referred to as helminthiasis. Other terms used to describe these drugs include:

Many helminths are intestinal worms transmitted through contaminated soil and infect the gastrointestinal tract. As such, these soil-transmitted worms are sometimes collectively referred to as geohelminths. Individuals with helminthias is excrete helminth eggs in their feces, which may result in contamination of soil.

To fully appreciate the medicinal chemistry of this topic, it’s worthwhile to take a few minutes to learn more about drug metabolism that we’ve previously covered. 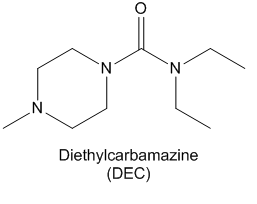 Diethylcarbamazine (DEC) belongs to a class of anthelmintics known as piperazines. As the name suggests, DEC is derived from piperazine, a heterocyclic six-membered nitrogenous compound bearing two nitrogen atoms at opposite positions in the ring (Piperazine: C4H10N2). The mode of action of DEC is not fully understood, but three mechanisms of action have been proposed:

Question 1: Can you name the six-membered heterocyclic secondary amine similar to piperazine, but possesses five carbons, one nitrogen and eleven hydrogens?

Methylpiperazine and piperazine are also known metabolism products of DEC.

Examples of anthelmintic drugs in this class include albendazole and mebendazole and, as the name suggests, both drugs bear an imidazole ring in their structure.

Albendazole, a drug on the World Health Organization’s List of Essential Medicines, is a vermicide used to treat conditions such as ascariasis, intestinal nematode infections, pinworm disease and giardiasis. The precise mechanism of action has not yet been fully elucidated, but albendazole is thought to result in degenerative alterations in the intestinal cells of helminths.

Mebendazole is a vermicide used in the treatment of infections caused by helminths such as roundworms, pinworms, and whipworm. Its mechanism of action is thought to involve glucose uptake blockage.