Infliximab Pharmacology | All the Facts in One Place! 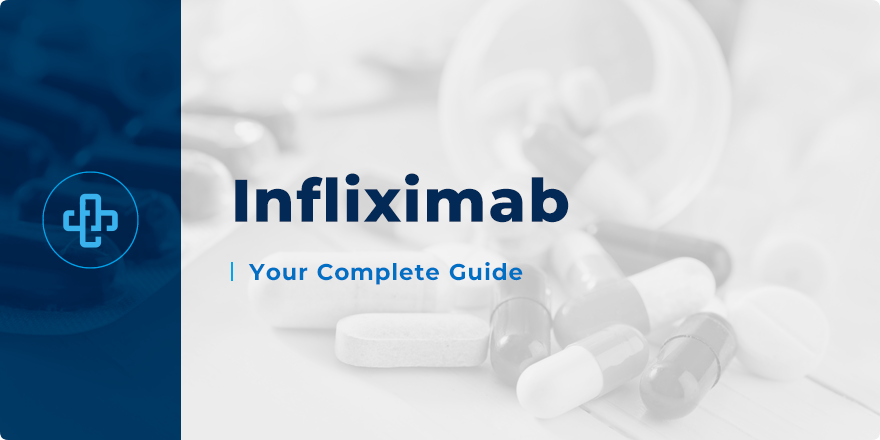 Infliximab is an important medicine used in the treatment of autoimmune diseases such as Crohn’s disease and ulcerative colitis. Here, we outline what the drug is used for, how it works, and what side effects and drug interactions its linked to.

Infliximab belongs to a class of medicines known as monoclonal antibodies. Through the suffix -mab, we can identify member drugs of this growing class.

The drug is marketed as Remicade in the United States.

Infliximab is used to treat autoimmune conditions such as:

Infliximab is not administered orally. If it were, the medicine would be destroyed by gastric juices. Instead, it is administered via the IV route – usually every 6 to 8 weeks – dosing in mg per kg of the patient’s weight.

It works as an inhibitor of TNF-alpha (TNF: tumor necrosis factor); a cytokine responsible for many effects of the autoimmune response, including:

Infliximab binds to TNF-alpha, meaning the cytokine no longer activates its target receptors. Infliximab targets both soluble (freely available in the blood) and transmembrane (outer portion of various immune cells) forms of TNF-alpha.

Through these means, infliximab reduces inflammation and pain associated with a variety of autoimmune diseases.

Side effects with infliximab include:

When we talk about the clinical pharmacology of infliximab, we need to think about the following factors:

Though infliximab comes with a wide variety of serious side effects, it remains a highly effective means to induce and maintain remission for autoimmune diseases that go unresponsive to other treatment forms.

For even more facts and pharmacology quiz questions on infliximab pharmacology, register with PharmaFactz today. Check back to our pharmacy blog soon for even more great articles on monoclonal antibodies!