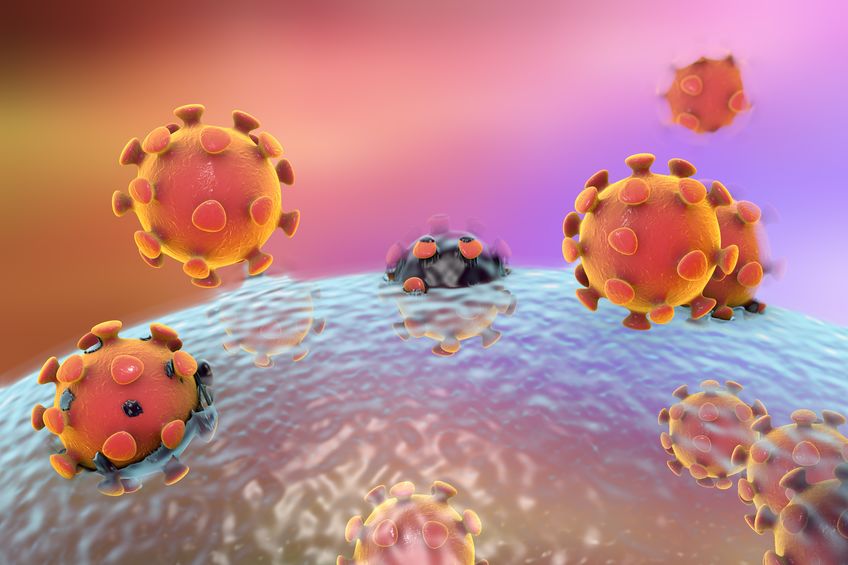 HIV – or human immunodeficiency virus – is a lentivirus that causes HIV infection. Over time, this can lead to the development of AIDS, or acquired autoimmune deficiency syndrome. Whilst there is no cure, the disease is treatable.

There are two types of HIV:

Most cases of HIV are caused by the more virulent and more infectious HIV type-1. Most cases of type 2 are confined to West Africa, with the strain being less virulent and less infective. Without treatment, the average survival time from the onset of infection to death is 10 years.

HIV can also be transmitted from mother to child through breast milk. It can also pass to the child during both pregnancy and childbirth – through infected blood or vaginal fluids. Most HIV cases are, however, contracted through sexual intercourse – such as infected semen, blood, pre-ejaculate or vaginal fluids. Once the virus enters the body, HIV targets many cells that are integral to the innate immune response – damaging T-helper cells, dendritic cells, and macrophages.

There are five major drug classes used in the treatment HIV/AIDs – medicines also known as antiretroviral agents. Multiple drugs are used as part of what is called HAART therapy – or highly active antiretroviral drug therapy.

For example, many medicines are formulated as “fixed-dose combinations”. Some of the most common include:

Antiretroviral drugs can be classified as follows:

There are three kinds of reverse transcriptase inhibitor:

Note – nucleotide analog tenofovir can be recognised as “t” for tenofovir, “t” for “-tide”. All non-nucleoside drugs have “-vir-“ within their names.

Nucleoside and nucleotide RTIs compete with deoxynucleotides needed to synthesize viral DNA. However, they lack a 3’-hydroxyl group. When incorporated into viral DNA, then, the viral deoxynucleotide cannot extend, a process known as chain termination.

Both nucleotide and nucleoside RTIs compete with host DNA as well as viral DNA, leading to the kind of side effects listed below.

In contrast, NNRTIs work by binding directly to the reverse transcriptase enzyme. Unlike NRTIs and NtRTIs, NNRTIs are not incorporated into viral DNA.

Side effects with RTI medicines include:

Other adverse effects include:

Tenofovir is associated with both nephrotoxicity and bone loss.

Protease inhibitors can be used to treat both HIV and hepatitis C.

Examples of protease inhibitors include:

Note: All protease inhibitors end in the suffix -navir.

Side effects of protease inhibitors include:

Protease inhibitors should be avoided with OTC drugs that reduce stomach acid production – such as PPIs and H2 antagonists – because the combination can markedly reduce protease inhibitor absorption. This effect is particularly pronounced with atazanavir.

Not all protease inhibitors are used for their intrinsic anti-HIV activity. For example – though ritonavir has anti-HIV activity (albeit minimal), it is not used for this purpose. Instead, it is used as an enzyme inhibitor – inhibiting enzymes such as CYP 3A4 that metabolize other anti-HIV medicines.

Ritonavir is an example of a pharmacokinetic enhancer.

Cobicistat is also a pharmacokinetic enhancer. It is used to inhibit CYP 3A enzymes, often to boost the effects of the integrase inhibitor, elvitegravir (see below), as well as several other reverse transcriptase inhibitors.

Examples of integrase inhibitors include:

Note: integrase inhibitors can be identified through the “-gravir” suffix.

As we learned above, elvitegravir is not taken in isolation. It is taken along the “booster” drug cobicistat, and alongside other drugs such as tenofovir and emtricitabine. Dolutegravir is also available in combination medicines – such as Triumeq, a combination of dolutegravir, abacavir, and lamivudine.

Side effects with integrase inhibitors include:

As integrase inhibitors are predominantly metabolized by CYP 3A enzymes, strong inducers of this enzyme should be avoided. This includes drugs such as phenytoin, rifampicin, carbamazepine, and St. John’s wort.

Entry inhibitors are the final class in our study of HIV drugs pharmacology. As their name suggests, entry inhibitors disrupt the ability of the HIV virus to enter cells. They target the binding, fusion, and entry phases of viral integration into the target host cell.

The binding-fusion-entry sequence for the HIV virus is as follows. Below, we learn where entry inhibitors block this process.

Examples of approved entry inhibitors include:

Side effects with maraviroc include:

Side effects with enfuvirtide include:

That concludes our review of HIV drugs pharmacology. Check back to our pharmacy blog soon for more exclusive content to help you master the science of drugs and medicines!