Glycopeptides Pharmacology | All the Facts in One Place! 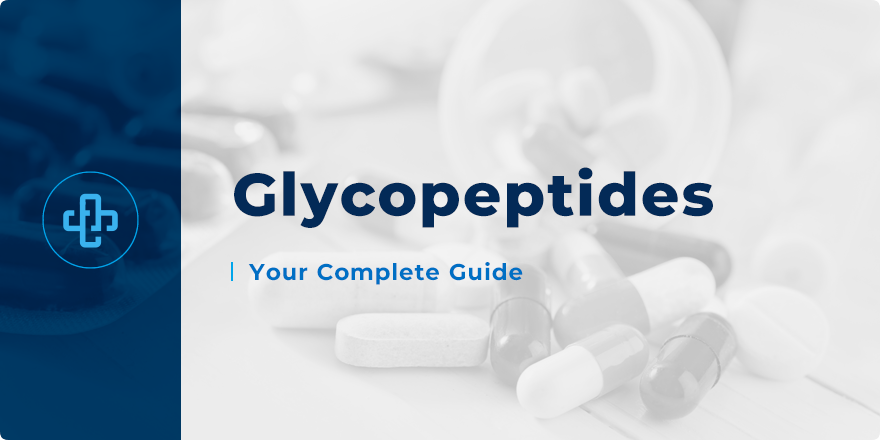 Examples of glycopeptides include:

Glycopeptides are used in the treatment of the following infections:

Teicoplanin is not available in the US.

Telavancin is most commonly used for severe skin infections and MRSA infections.

All glycopeptides are used in the treatment of Gram-positive infections only. As we learn more about their mechanism of action, it becomes clear to see why.

Gram-positive organisms have a backbone to their call wall – namely, intertwining strands of N-acetylmuramic acid (NAM) and N-acetylglucosamine (NAG). Glycopeptides bind to the D-Ala-D-Ala formation that prevents synthesis of these polymers.

This compromises the structural integrity of the cell wall and destroys the bacteria.

Side effects associated with glycopeptide antibacterials include:

Though glycopeptides are often associated with ototoxicity and nephrotoxicity, it is widely believed that these effects were more common in earlier investigations but are, on review, much rarer than first believed. Nonetheless, they do remain risks.

When we talk about the clinical pharmacology of glycopeptides, we need to think about the following factors:

Glycopeptides are important medicines in the treatment of Gram-positive infections, particularly infections that have proven resistant to more established therapies. It’s worth recognising that their resistance does, though, continue to increase.

For even more facts and pharmacology quiz questions on glycopeptides pharmacology, register with PharmaFactz today. Check back to our pharmacy blog soon for even more great articles on antibacterial drug classes!