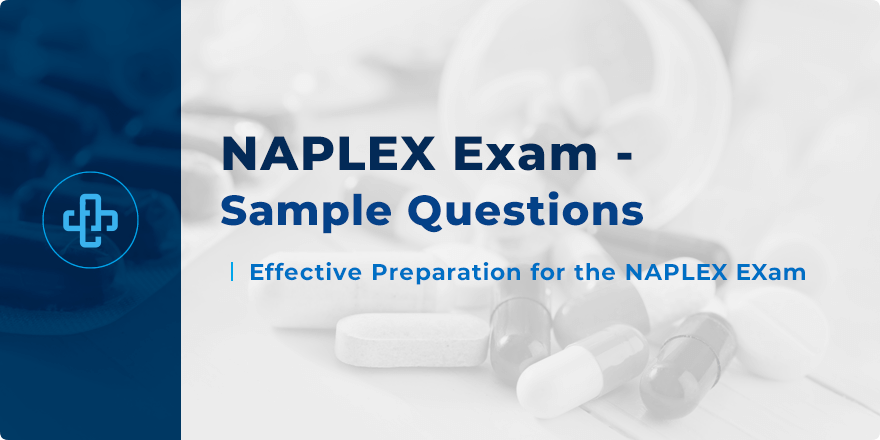 To become a qualified, licensed pharmacist in the United States, you must pass the NAPLEX exam.

The exam is difficult. It’s composed of 250 NAPLEX exam questions – 200 of which are used to calculate your final score. The questions are diverse, but all focus around three key themes.

First, the need to have a comprehensive, rounded understanding of both general and clinical pharmacology.

Second, to have an in-depth knowledge of OTC medicines and clinical pharmacy.

We can recommend our partners NAPLEX Study Guide – for NAPLEX questions that reflect the standard, style and substance of exam-like questions you can expect to face.

Whatever your needs, then, NAPLEX Study Guide has you covered.

NAPLEX questions follow a multiple-choice format. We’ve added just a few examples below for you to consider.

Patients are advised to take which drug with 8 ounces of water to prevent crystaluria?

Which of the following penicillin drugs is indicated for syphilis patients?

Which of the following benzodiazepines should be avoided in patients with liver dysfunction?

Patients with renal failure remain at risk to experience which effect post-administration of sucralfate?

Calculate w/w% of a solution that contains 3.1 grams of sucrose in 70 millilitres of water?

Which of the following medicinal class is used in the treatment of benign prostatic hyperplasia (BPH)?

How did you perform?

How to Pass the NAPLEX Exam

To pass the NAPLEX exam, you need to practice as many NAPLEX exam questions as possible. The more questions you try, the more focused your study becomes. You can then learn more about your strengths and weaknesses – turning those weaknesses into strengths.

NAPLEX Study Guide gives you complete access to full-length practice exams – reflecting the exam conditions you can expect to face. This gives you invaluable information as to how well prepared you are. Taking the NAPLEX exam is expensive, too – another reason not to fail!

Passing the NAPLEX exam doesn’t need to be difficult. Like all pharmacy licensing exams, it takes time and strategy and a long-term practical approach that covers all necessary topics. By taking NAPLEX sample questions, you bring that reality of becoming a licensed US pharmacist that much closer.