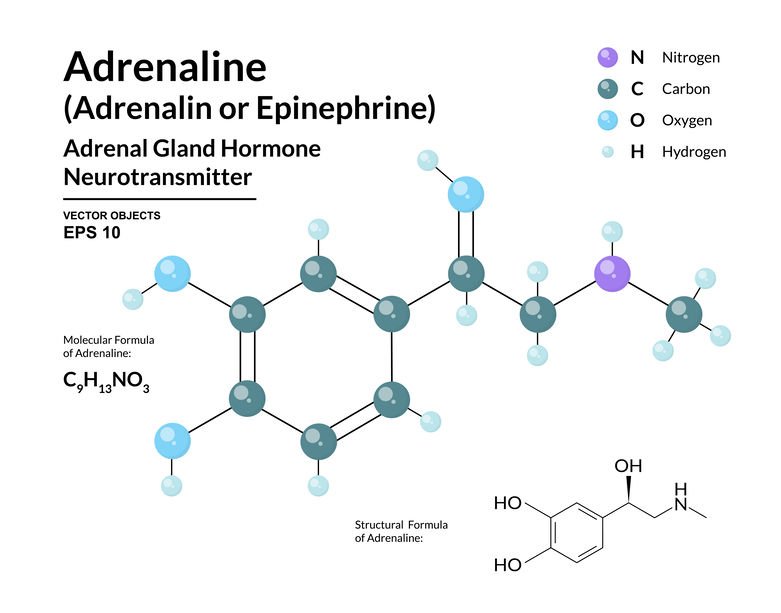 Also known as adrenaline, epinephrine is an important medicine used in the treatment of often life-threatening conditions. Here, we review the must-know pharmacology of epinephrine that you need to know.

Epinephrine is a hormone produced from the adrenal glands as well as from certain neurons, where it acts as a neurotransmitter. Epinephrine is responsible for “flight or fight” effects such as:

Clinically, epinephrine is used in the treatment of conditions such as:

Let’s now turn our attention to how epinephrine works to achieve these therapeutic effects.

The panoply of “flight or fight” effects are mediated via epinephrine agonism at:

The beta-2 effects are vital in the treatment of anaphylaxis. Anaphylaxis leads to hypotension, vasodilation, and bronchoconstriction. Agonism at beta-2 receptors leads to bronchodilation and suppression of inflammatory mediator release from mast cells – reducing inflammation and promoting bronchodilation.

Common side effects with epinephrine include:

A small number of patients may experience abnormal heart rhythms, acute pulmonary edema, and – in very rare cases – epinephrine has been linked to Takotsubo cardiomyopathy.

However, epinephrine increases the risk of serious cardiovascular events in patients with established heart disease.

Clinical pharmacology factors to consider about epinephrine include:

That’s about it for our study of epinephrine pharmacology. Check back to our pharmacy blog soon for more exclusive content to help you master the science of drugs and medicines!