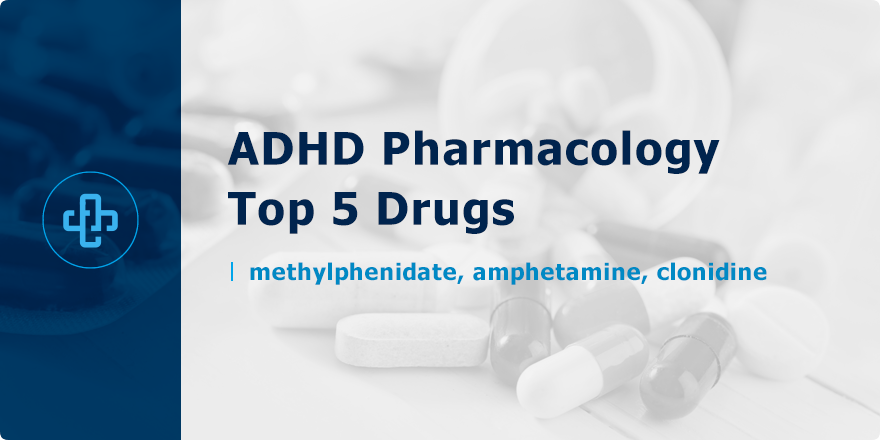 ADHD – or attention deficit hyperactivity disorder – is a mental affliction that affects up to 10 percent of children in the United States. Boys are twice more likely to be affected than girls (12.9% versus 5.6%).

Symptoms of ADHD include:

Even though these symptoms can have a profound impact on the patient’s life, as well as the knock-on effects the people they know, there is a wide range of effective medicines that help to control these symptoms.

Below, we review the pharmacology of five of the most used ADHD drugs.

Sold under trade names such as Ritalin and Concerta among others, methylphenidate is one of the most widely used drugs used to treat ADHD. It was first made in 1944 and was FDA-approved for medical use eleven years late, in 1955.

Methylphenidate works via a variety of means – most notably as a norepinephrine-dopamine reuptake inhibitor (NDRI); a psychostimulant that boosts the activity of the central nervous system by suppressing the reuptake of neurotransmitters such as norepinephrine and dopamine. Increased levels of these neurotransmitters result in enhanced alertness and improved focus and attention.

Side effects of methylphenidate include:

Methylphenidate is contraindicated for use alongside monoamine oxidase inhibitors such as phenelzine and tranylcypromine.

Sold under Strattera among other brands, atomoxetine is used alone or in combination with other drugs to treat ADHD. Its use is recommended only for patients who are over the age of 6 years.

Side effects of atomoxetine include:

Clonidine is used to treat ADHD as well as other conditions such as hypertension and assisting with drug withdrawal from alcohol, opioids, or smoking. The drug was first patented in 1961 and was first approved for clinical use in 1966.

In hypertension, clonidine works by stimulating alpha-2 receptors in the brain which lowers peripheral vascular resistance. In the case of ADHD, things are slightly different. Instead, clonidine works to specifically agonize the alpha-2A receptor, which is predominantly found in the prefrontal cortex. By agonizing the alpha-2A receptor, clonidine has an inhibitory downstream effect on norepinephrine. And as we have seen with other drugs used to treat ADHD, norepinephrine is a potent target that, when inhibited, alleviates many of the symptoms that patients experience.

Side effects of clonidine include:

Rarely, clonidine can cause hallucinations, confusion, and arrhythmias.

Amphetamine is a contraction of alpha-methylphenethylamine; a stimulant used to treat ADHD and narcolepsy. Trade names include Adderall, Adzenys XR-ODT, Dyanavel XR, and Evekeo.

Side effects of amphetamine include:

A small number of patients may experience rarer side effects such as delusions, hallucinations, pronounced hypotension or hypertension, and seizures.

For more on drugs used to treat ADHD, become a registered member of PharmaFactz today. Check back to our pharmacy blog soon for more great content on all-things pharmacy!