The following article builds on previous drug design articles. This article mainly focuses on the drug design techniques used by medicinal chemists to improve the pharmacokinetic properties of lead compounds and drugs.

The term ‘rule of five’ comes from the fact that the numbers involved are multiples of five. The rule has been extended to account for factors such as rotatable bonds, polar surface area, and molar refractivity. While useful as a guide during drug design, it is important to mention that the rule of five doesn’t always apply. Examples of orally active drugs that do not obey Lipinski’s rules include the HMG CoA reductase inhibitor atorvastatin (Lipitor), and the CysLT1 antagonist montelukast (Singulair). The predicted Log P values were acquired from ChemSpider and were generated using ACD Labs’ ACD/PhysChem Suite. Given the generated Log P values, can you determine which rules are being violated?

Prodrugs are inactive derivatives of active drug molecules that are converted to parent drug molecules in the body, typically by enzymatic processes in the body. The use of prodrugs can circumvent problems related to the pharmacokinetics of a molecule’s pharmacologically active form. Factors that can be influenced include aqueous solubility, lipid solubility, membrane permeability, metabolic stability, and toxicity. Prodrugs can be divided into two main classes: carrier-linked and bioprecursors.

Carrier-linked prodrugs are prodrugs which contain the active compound linked to a removable carrier group. Removal of the carrier group is usually through hydrolysis reactions in the body. Ideal drug carriers are inert, non-toxic, cheap, stable in dosage form, and allow for the localisation of the drug at the site of action.

Esters and amides are major groups of carrier-linked prodrugs. Drug molecules which contain alcohols and carboxylic acids can be esterified to give ester prodrugs. Esterases are hydrolase enzymes. A large number of esterase enzymes are found in the body which could liberate the active form of the drug. Esters are useful in modifying the lipophilicity of drugs. Aliphatic esters generally enhance lipid solubility whereas phosphate esters improve aqueous solubility.

Carrier-linked prodrugs are further divided into:

1) Bipartite prodrugs: comprises of a carrier directly attached to the parent drug. Most carrier-linked prodrugs are bipartite in nature.

Latanoprost (Xalatan) is used to treat glaucoma. The more lipophilic isopropyl ester prodrug is hydrolysed by corneal esterases to give the biologically active acid.

2) Tripartite prodrugs: comprises of a carrier connected to a drug through a linker.

Pivampicillin is a pivaloyloxymethyl ester tripartite prodrug of the β-lactam antibiotic, ampicillin. The prodrug uses a –CH2– linker to link ampicillin and the pivalic acid carrier. Pivampicillin is thought to have greater biovailability than ampicillin because the ester group grants the compound greater lipophilicity.

Some prodrugs are metabolically activated in the body by oxidation or reduction rather than simple hydrolysis. These prodrugs are known as bioprecursor prodrugs.

Pralidoxime (Protopam) is used as an antidote to treat poisoning by certain organophosphorus compounds. The antidote basically works by reactivating acetylcholinesterase following inhibition by irreversible AChE inhibitors such as sarin. Pralidoxime itself is too polar to cross the blood brain barrier. Replacing the pyridine with dihydropyridine gives a prodrug. The dihydropyridine group grants the prodrug enough lipophilicity to cross the blood brain barrier, where the dihydropyridine is oxidatively converted to the pyridinium to give the parent drug, pralidoxime.

Sulindac is a non-steroidal anti-inflammatory drug (NSAID) used to treat acute and chronic inflammatory conditions. Sulindac is a prodrug that contains a sulfoxide group, and is an example of a prodrug that is activated by reduction. The sulfoxide is converted to a thioether (sometimes referred to as sulfide), giving the active metabolite. The reduction of the sulfoxide is mainly mediated by liver enzymes. Because sulindac is a prodrug, the active metabolite is present in lower concentrations at the gastric mucosa. The incidence of GI side effects is lowered compared to a chemically related NSAID, indomethacin. 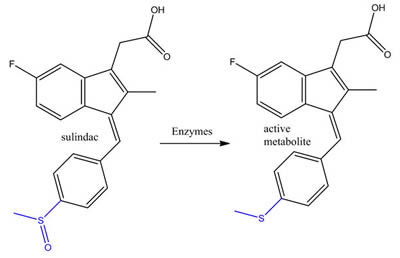 Further reading on the topic of prodrugs:

Bioisosteres are chemical groups with similar physicochemical properties which give broadly similar biological properties to a compound. Bioisosteres can replace problematic chemical groups in order to enhance the biochemical and physicochemical properties of a compound without significantly changing the chemical structure. This technique is commonly used in rational drug design to address problems such as metabolic stability, unsatisfactory distribution, and poor absorption. Bioisosteres also allow for the development of “me-too” drugs. Prodrug strategies and bioisostere strategies are often used alongside each other to improve ADME properties. Examples are shown below as well as a few examples of bioisosteric replacements utilised during drug design.

The use of ring equivalents is highly common in drug design for reasons such as acquisition of novel intellectual property or improving metabolic stability. An example would be the selective COX-2 inhibitors. Companies produce variants of an existing drug produced by their competitors in order to gain a foothold in the same market area. Variants can be made using bioisosteres. The diagram below shows the different heterocycles used in celecoxib (pyrazole), etoricoxib (pyridine), and valdecoxib (isoxazole) as well as the companies that market them. Some COX-2 inhibitors such as rofecoxib and valdecoxib were withdrawn from the market due to cardiovascular problems associated with these nonsteroidal anti-inflammatory drugs (NSAIDs). G.D. Searle and co., now part of Pfizer, used to market valdecoxib.

The ester group of the local anaesthetic, procaine is readily hydrolysable. Under physiological conditions, amides are generally more resistant to hydrolysis compared to esters due to resonance stabilisation. Replacement of the ester group with an amide group gave the more metabolically stable amide analogue, procainamide. 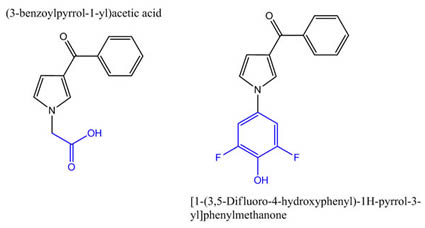 Ezetimibe (Zetia) is a cholesterol absorption inhibitor acting at the small intestine. Hydroxylation at the para position of benzene rings is a common metabolic process in the body. The lead compound’s para substituents were replaced with fluorine, thereby enhancing metabolic stability. C-F bond dissociation energies average at around 425 kJ mol-1. This renders the C-F bond relatively inert to metabolic cleavage. Furthermore, hydrogen and fluorine have similar van der Waals radii so replacement with fluorine does not exert significant steric demand at binding sites.

Replacements: There are many more replacements possible other than the ones listed here. 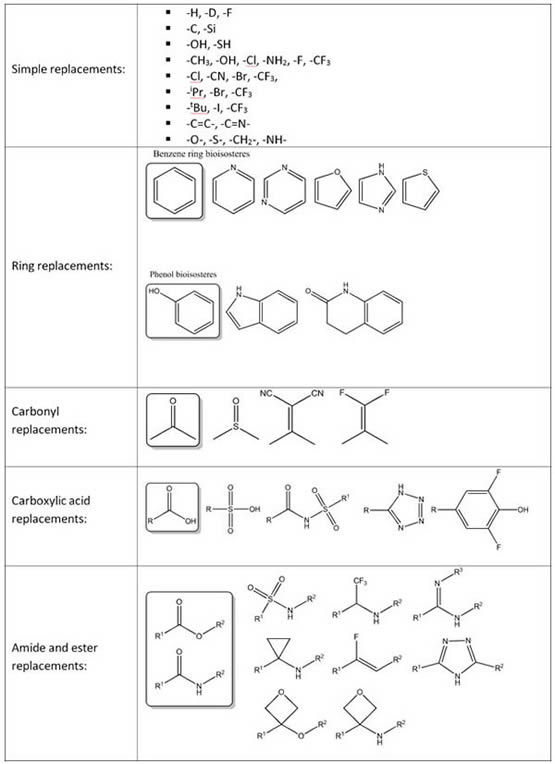 Further reading on the topic of bioisosteres:

Toxic metabolites can form during biotransformation reactions. Their formation can be avoided by using structural modifications that prevent their formation in the first place. Isoquine, a direct isomer of the antimalarial compound amodiaquine, was found to have reduced toxicity. Isoquine served as a new lead compound with reduced hepatotoxicity. The observed toxicity of amodiaquine is thought to be because of the formation of a toxic electrophilic quinoneimine metabolite which can react with cellular macromolecules and initiate hypersensitivity reactions. The hydroxyl group of isoquine is at the meta position rather than the para position in amodiaquine. The formation of the toxic metabolite with isoquine is not possible.

From the examples shown above, it is easy to see that the hydrophilic/lipophilic character of a drug molecule is crucial in influencing the molecule’s ADME properties. Drugs taken orally that are too polar tend to have difficulty crossing the cell membranes of the gut wall. Polar drugs also tend to have polar functional groups making them prone to metabolic phase II conjugation reactions as well as rapid excretion. On the other hand, orally administered drugs that are too lipophilic tend to be dissolved in fat globules in the gut and are poorly absorbed. Furthermore, drug distribution is poor because highly lipophilic drugs have poor blood solubility (ie. aqueous solubility), and are likely to be taken up by adipose tissues. A balance between lipophilicity and hydrophilicity must be reached.

Generally, the lipophilic/hydrophilic character of a molecule can be controlled by simple replacement of chemical groups (ie. using bioisosteres). It is also possible to use prodrug strategies to control lipophilicity/hydrophilicity. Rigidification and intramolecular hydrogen bonding also play a role in a drug’s pharmacokinetic properties. Rigidification strategies were introduced in another article. Too much flexibility usually contributes to reduced oral activity. Intramolecular hydrogen bond formation is also thought to enhance membrane permeability (Med. Chem. Commun., 2011, 2, pp 669-674).

Tioconazole is an antifungal drug mainly used for skin infections. This compound is non-polar and has low aqueous solubility and is not useful for treating systemic infections. The replacement of the less polar heterocycles with more polar heterocycles as well as the introduction of a hydroxyl group led to the orally active compound, fluconazole. These structural changes made fluconazole more soluble in blood, making the drug more useful for treating systemic fungal infection.

Giving drug molecules site-specificity is of crucial importance especially in reducing side effects. Drug design methods to improve receptor specificity were described in a previous article. Site-specificity can be achieved through various methods. Blood-brain barrier penetration is achievable by taking advantage of transport proteins or altering a drug’s structure to make it more lipophilic (eg. dihydropyridine prodrug of pralidoxime). Attaching drugs to monoclonal antibodies (ie. antibody-drug conjugates or ADCs) can grant site-specificity. Gastrointestinal bacterial infections can be treated by using highly ionisable sulfonamides, thereby preventing them from being absorbed into the blood supply. Anti-cancer drugs can take advantage of the enhanced permeation and retention effect (EPR effect) by attaching them to macromolecular carriers or nanoparticles (J. Am. Chem. Soc., 2014, 136 (16), pp 5896–5899).

During the design of analogues of lead compounds, pharmacokinetics, pharmacodynamics, and structure-activity relationships must be kept in mind. Furthermore, proposed analogues must generally be accessible through synthetic organic chemistry. At the end of the day, proposed compounds will be synthesised and tested in vitro and in vivo.

This concludes the article drug design strategies used to improve the pharmacokinetic properties of a drug. With the knowledge of structure-activity relationships (SAR), drug design strategies are used on the lead compound to synthesise analogues with optimised binding site interactions and improved access to the target. Generally, the optimised lead compound becomes a preclinical candidate which undergoes further testing and clinical trials. If successful, the clinical candidate is eventually released on the market as a new drug entity.