Human malaria continues to be a major parasitic disease affecting nearly half of the human population. This case study explores the discovery of the lead compound, artemisinin. Looking back on previous articles, drug design techniques used to produce derivatives of the lead compound will be discussed.

Malaria is an infectious disease known since ancient times. The name comes from the words ‘mala aria‘ meaning ‘bad air’. Malaria was associated with regions that are badly drained, swamps, and marshes. The disease is caused by a protozoal parasite (genus plasmodium), which is carried by female mosquitos (genus Anopheles). Species of genus plasmodium associated with malaria include vivax, malariae, falciparum, and ovale. Plasmodium falciparum poses the greatest danger to humans and it is known to affect up to 65% of an infected person’s erythrocytes. Transmission between infected mosquitos and humans occur through mosquito bites.

The disease is commonly associated with tropical and sub-tropical countries. In the past, malaria was present in certain parts of southern Europe and the Americas. Some believe that increased international travel and climate change could lead to the resurgence of malaria in these regions. It is estimated that around half of the human population are at risk of infection and the estimated number of infected individuals in 2010 is over 200 million. Child mortality rates are particularly high, especially in sub-Saharan Africa.

Controlling the mosquito is one way of controlling malaria. The anopheles mosquito is a nocturnal feeder. Using screens on windows and using mosquito netting in bedrooms can reduce the chances of getting bitten. Furthermore, impregnating netting systems with insecticidal compounds has proven to be effective in reducing biting. Application of insect repellent on one’s skin or clothing can also repel the insect. DEET (N,N-Diethyl-meta-toluamide) is an active ingredient commonly found in insect repellents. Recent evidence suggests that mosquitos have strong aversion to the odour of DEET.

Natural compounds from the bark of the cinchona tree, most notably quinine was observed to exhibit antimalarial activity. Until the development of synthetic derivatives (ie. 4-aminoquinoline antimalarials), quinine continued to be the first choice to treat malaria in the West. However, quinine is associated with side effects such as diarrhœa. 4-aminoquinoline antimalarials such as amodiaquine and chloroquine largely replaced quinine because of reduced unpleasant side effects.

The life cycle of the parasite and the immunological defence mechanisms against the parasite are complex. Part of the parasite’s life cycle involves invasion of red blood cells (erythrocytes). The haemoglobin within the red blood cell is broken down by the parasite and is used as a source of amino acids. The 4-aminoquinolines act at the erythrocytic stage of the parasite. The mechanism of action of the 4-aminoquinolines will be discussed in a future article. Doxycycline is a compound used in prophylaxis against plasmodial parasites. Other compounds associated with treating malaria include halofantrine and lumefantrine. These are often used in combination with other drugs. 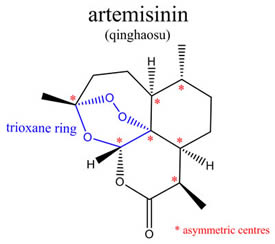 Unfortunately, the spread of resistance to classical antimalarial drugs by the malaria parasite began emerging after the 1960s. This highlighted the need for novel antimalarial compounds. The herb, artemisia annua has been used by Chinese herbalists for over two millennia. It was not until after the 1970s when the active principle was identified by Chinese scientists and was called qinghaosu (artemisinin). Clinical studies performed on members of the Chinese army that are affected by malaria delivered excellent results. The experiments demonstrated that qinghaosu had excellent therapeutic efficiency. Most notably, chloroquine-resistant plasmodium falciparum were affected by the active compound of a. annua.

The researchers who discovered qinghaosu not only had problems with production and formulation. They were also restricted from disseminating their findings to the rest of the world. External access to the purified drug was generally restricted by the Chinese government at the time. Organisations with resources to study a. annua such as the World Health Organisation (WHO) were denied access to the herb and the drug. The results of the studies were eventually published on the Chinese Medical Journal where the information became more accessible to those outside China (Chinese Medical Journal, 1979, 92 (12), pp 811-816).

Many scientists were initially sceptical of artemisinin’s usefulness as a drug because of the compound’s unstable appearance. The trioxane ring which contained an endoperoxide bridge was cited to be an unstable feature. It is now generally believed that the trioxane ring is central to the compound’s activity. The mechanism of action of the lead and its derivatives differ greatly with that of the quinine-based drugs. It is thought that the mechanism involves iron ions and the subsequent formation of radical species which are toxic to the parasite.
Further reading on the discovery of qinghaosu:

Artemisinin is a natural product that can be extracted from the leaves of artemisia annua (commonly known as sweet wormwood). The therapeutic utility of the lead itself is limited by poor physicochemical properties such as poor oil and water solubility. Artemisinin serves as a lead compound for the development of new antimalarials with improved properties. The lactone group can be reduced using reducing agents such as sodium borohydride (NaBH4). The reduced form of the lead, dihydroartemisinin is used to prepare semisynthetic prodrug derivatives that are more water-soluble or oil-soluble. The hydroxyl group can be alkylated to give oil-soluble ether derivatives such as artemether and arteether. Esterification of the hydroxyl with succinic acid gives the water-soluble derivative, artesunate. Artemether is generally given to patients through intramuscular injections. Artesunate can be administered intravenously and orally. Artemisinin semisynthetic derivatives are often administered alongside other antimalarials to decrease the likelihood of the development of resistance.

The synthesis of analogues, as well as the study of metabolites allowed researchers to investigate structure-activity relationships. Studies of artemisinin analogues such as deoxyartemisinin which do not contain the endoperoxide bridge, showed vastly reduced biological activity. In essence, structure-activity relationships studies of analogues led to the conclusion that the trioxane ring containing the endoperoxide bridge is part of the pharmacophore and is crucial to antiplasmodial activity. Moreover, derivatisation at the carbonyl lactone demonstrated that it is a possible region of modification that can be manipulated in order to improve pharmacokinetic properties. This was demonstrated by the semisynthetic prodrugs. Compared to artemisinin itself, artemether, artesunate and dihydroartemisinin are more active.

The structure of artemisinin is quite complex. The compound is a tetracycle with seven asymmetric centres. As mentioned earlier, the tetracycle contains a trioxane ring with an endoperoxide bridge. Although at a first glance, it would appear that artemisinin is an unstable molecule. In fact, the compound is generally stable to heat and light. The total synthesis of artemisinin from readily available materials has been documented in the scientific literature by numerous groups. One example of artemisinin total synthesis is reported by Zhu et al, using 1-cyclohex-2-enone as the main starting material.

Total syntheses of structurally complex natural products can be extremely costly and would make the final compound more expensive. There is an obvious advantage to using structurally simpler analogues of lead compounds. Keeping structure-activity relationships in mind, simplification strategies have been employed in the development of artemisinin derivatives. The development of simplified artemisinin analogues would be beneficial to markets that are unable to purchase expensive drugs.

The synthesis and studies of simplified derivatives of artemisinin and related compounds have been documented in the scientific literature. The structures of several analogues are shown below. Note how the simplified derivatives shown retain pharmacophoric peroxide bonds. For instance, antimalarial cyclic peroxy ketals developed by Posner and co-workers exhibited greater activity compared to artemisinin. However, these cyclic peroxy ketals faced problems such as short plasma half-life and poor chemical stability. Dispiro-1,2,4,5 tetraoxanes synthesised by Vennerstrom and co-workers exhibited good antimalarial behaviour during in vitro and in vivo studies.

Arteflene, which is based on another endoperoxide-containing compound known as yingzhaosu, exhibited antimalarial activity about half of artemisinin. Arterolane (OZ277), a synthetic trioxolane with better pharmacokinetic properties than semisynthetic artemisinins, is currently in clinical trials. To date, clinical use of simplified derivatives of artemisinin has not reached widespread use.

This concludes the case study on artemisinin as a lead compound for novel antimalarials. Journal articles on related topics are listed below. Artemisinin’s ability to affect chloroquine-resistant plasmodium falciparum makes it a useful lead compound. Prodrug strategies and simplification strategies and the resulting analogues were briefly outlined. The growing resistance of plasmodium parasites to classical antimalarials drives the need for new preventative measures, control measures, and antimalarial drugs.