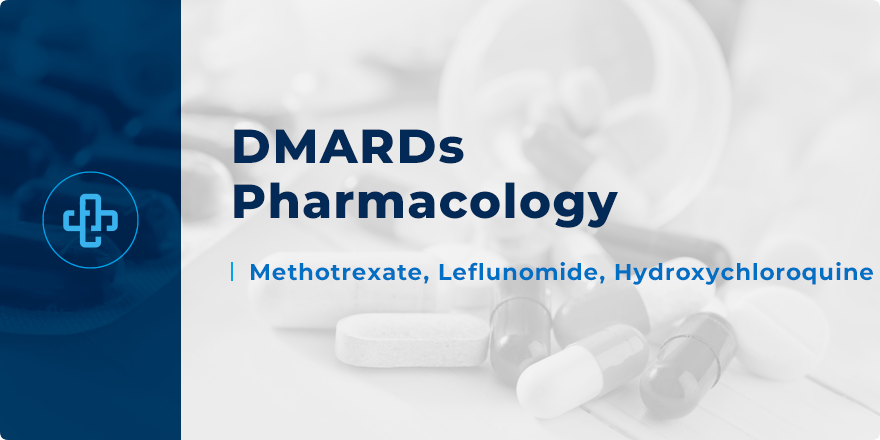 DMARDs are disease-modifying anti-rheumatic drugs used to treat rheumatoid arthritis. Here, we review DMARDs pharmacology – the primary members, how they work and what indications they are used to treat.

Even though DMARDs share a common indication – rheumatoid arthritis – individual DMARDs are used to treat a variety of other inflammatory and auto-immune diseases. Below, we review the indications that each medicine is used to treat.

The purpose of DMARDs is clear – to slow progression of rheumatoid arthritis.

DMARDs are, then, an important clinical alternative.

Of course, DMARDs are not only used to treat rheumatoid arthritis.

Due to their mechanism of action, DMARDs are effective in the treatment of other inflammatory-autoimmune states.

The function of DMARDs is to reduce pain and inflammation; to prevent long-term joint damage; and to preserve the structure and function of bone/joints. This is achieved by suppressing the immune response / inflammatory reaction.

However, effects can take many weeks/months to take effect – depending on the drug, the patient, their condition, and disease progression:

DMARDs are not administered to provide immediate symptomatic relief. Other drugs, such as NSAIDs or analgesics, may instead be given for this purpose.

For this reason, DMARDs are sometimes referred to as “remission inducing drugs”.

When choosing a DMARD, there are a variety of factors to consider.

First, the autoimmune / inflammatory state and its severity. These factors also influence what dosage regiment may be adopted, and what monitoring program the patient can expect to undertake.

Second, patient preference. Patients may have responded favourably to some DMARD in the past. Side effect profiles must be considered, too. Patients should understand the likely side effects of each drug and how it may impact their day-to-day life.

Third, likely clinical benefits. The ratio of clinical benefit versus adverse effect profile must be considered. Patients should be informed of expected results and the capacity to which the drug can realistically improve their lives.

Fourth, elimination of risk factors. Patients may be tested for past exposure to specific infections. These blood tests are a necessary component that may rule out what DMARD may be prescribed to the patient. Other patient risk factors must also be considered.

Fifth, patient response. One DMARD may prove effective, whilst another proves to be somewhat ineffective or whose side effects have become too problematic. In some cases, more than one DMARD is required. Often, it comes down to trial and error to determine the optimum DMARD(s) to treat the specific needs of the patient.

Below, we’ve put together a table of some of the most commonly used DMARDs. How they work – their mechanism of action – has also been added.

DMARDs are, then, an effective means not only in the treatment of rheumatoid arthritis but also other autoimmune-inflammatory states, too.

For even more facts on DMARDs pharmacology, register with PharmaFactz today. Check back to our pharmacy blog soon for even more great articles on DMARDs and the valuable role they continue to play in the clinical setting.