Bisphosphonates Pharmacology | All the Facts in One Place! 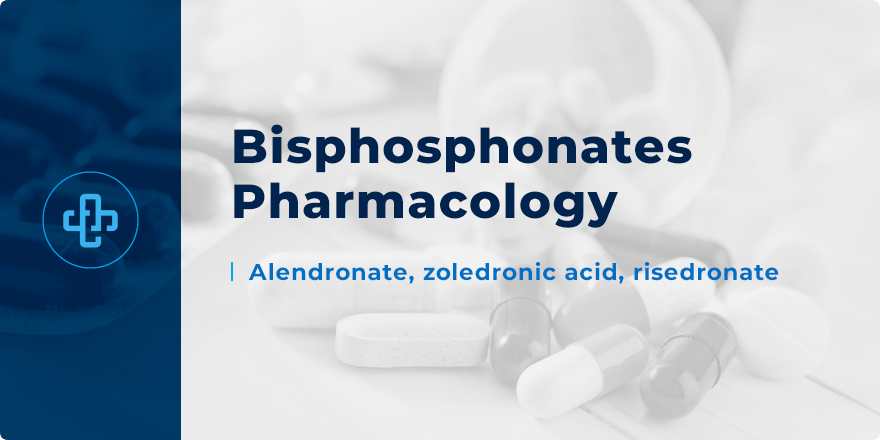 Bisphosphonates are medicines used in the treatment of bone disorders. For example – they can be used to treat osteoporosis, Paget’s disease of bone and hypercalcemia caused by the presence or otherwise of malignancy.

Bisphosphonates remain an important medicinal class; a drug class first developed, at least in their modern form, throughout the 1960s. Originally, bisphosphonates were developed for non-biological reasons – for example: to help soften water. Since then, bisphosphonates have become the mainstay of treatment for a wide variety of bone and calcium-based disorders.

Bisphosphonates are used in the treatment of the following conditions:

With these indications in mind, let’s take a few minutes to review bisphosphonates pharmacology; how the drugs work to exert their therapeutic effect.

The less bone that’s broken down, or “remodelled”, the lower the risk of developing fractures and the lower the release of calcium ions into the bloodstream. These drugs also ensure that bone density remains high.

More specifically, bisphosphonates are taken up by bone cells because they are structurally related to compounds like pyrophosphate. Enzymes that would otherwise use pyrophosphate are now inhibited from doing so.

Along that pathway, nitrogenous bisphosphonates inhibit the enzyme farnesyl diphosphate synthase (FPPS) and, through this inhibition, they prevent formation of two metabolites:

These two metabolites are responsible for connecting proteins in the cell membrane – causing a disruptive effect for osteoclasts and, by extension, bone resorption.

Bisphosphonates are associated with their own range of potential side effects.

Side effects with bisphosphonates include:

Bisphosphonates are also linked to hypophosphatemia.

Esophagitis is a common side effect, particularly through oral administration – an effect which may lead to many of the side effects listed above.

Some bisphosphonates – such as zoledronic acid and pamidronate – can only be administered via the intravenous route. Additional side effects include high blood pressure, fever and joint pain. After their first infusion, they may cause flu-like symptoms.

Renal impairment is a potential side effect. Patients must take adequate hydration before administration.

A rare but serious effect, osteonecrosis of the jaw (ONJ) – a risk associated more with long-term intravenous therapy.

When we talk about the clinical pharmacology of bisphosphonates, we need to think about the following factors:

Bisphosphonates continue to play an important role in the treatment of bone disorders, hypercalcemia and as part of a wider cancer treatment. Given their therapeutic effectiveness, limited drug interaction profile and ease of administration, their use is likely to continue unimpeded in the coming months and years.

Want to learn more about bisphosphonates pharmacology? Register with PharmaFactz today to receive instant access to all the resources you need. In the meantime, take a few seconds to join our pharmacy blog newsletter (above) to receive all the latest facts direct to your email!