Benzodiazepines Pharmacology | All the Facts in One Place! 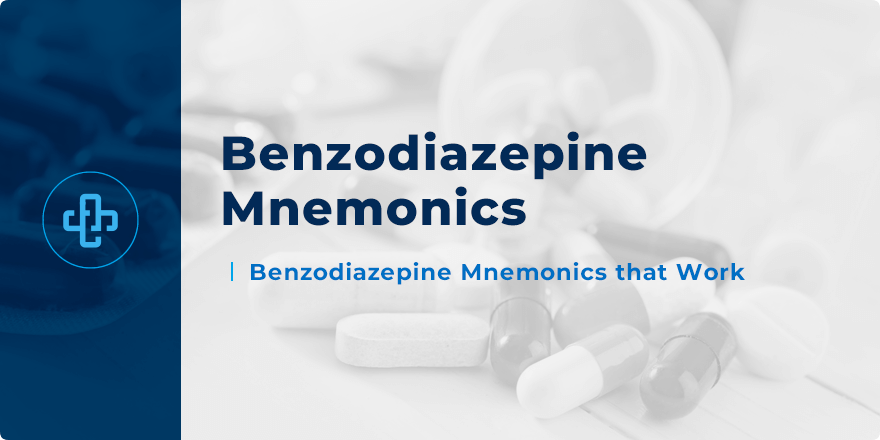 Benzodiazepines are among the most widely prescribed classes of medicines. They are used in the treatment of a wide variety of conditions – from anxiety to seizures – not least because of their mechanism of action. Today, we review the essential and relevant facts that underpin benzodiazepines pharmacology.

The first benzodiazepine, chlordiazepoxide, was discovered in 1955 by Leo Sternbach of the Swiss pharmaceutical giant, Hoffmann-La Roche. Marketed as Librium, it had notable sedative, anticonvulsant and muscle relaxant properties.

Eight years later another medicine, called diazepam, was introduced to the world. It was through the introduction of benzodiazepines that barbiturates were to go into terminal decline.

Fourteen years later, in 1977, benzodiazepines became the most widely prescribed class of medicines in the world.

Even today, they play an instrumental role in the treatment of a wide variety of medical conditions.

Before we review the mechanisms that underpin benzodiazepines pharmacology, let’s first review the many indications that they are used to treat:

Benzodiazepines are compounds whose chemical structure is a fusion between a benzene ring and a diazepine ring. Through this fundamental structure they exert their anxiolytic, anticonvulsant, sedative, hypnotic and muscle relaxant properties at their target receptor.

Most benzodiazepines can be identified through their suffix -pam. The exceptions to this rule contain ‘-aze-’ within their drug names.

Examples of benzodiazepines include:

With these medicines in mind, let’s take a closer look at benzodiazepines pharmacology; the mechanism of action through which they exert their therapeutic effects.

The mechanism of action of benzodiazepines is simple.

Their target is the GABAA receptor; a chloride channel that opens in response to the binding of GABA, an inhibitor neurotransmitter, to the receptor.

Once the channel opens, chloride floods into the cell – meaning the cell is less receptive to the effects of depolarisation.

That’s where benzodiazepines come in. Benzodiazepines encourage the binding of GABA to the GABAA receptor, enhancing its inhibitory effects throughout the brain.

With less depolarisation, action potentials begin to dry up. An inhibitory, depressant, effect takes hold. It is this depressant effect that manifests in the many therapeutic roles that benzodiazepines offer the clinician.

Neurons in the brain become accustomed to the effects of benzodiazepines, leading to tolerance. As a result, when patients need to be withdrawn from the medicines, they should be withdrawn over a prolonged and defined period. This reduces the incidence of withdrawal effects.

Not all benzodiazepines have the same activity. They are divided into:

Easier to recall as they contain two rogue-named drugs that don’t end in “-pam”, as well as diazepam – the most well-known benzodiazepine.

Benzodiazepines are associated with the following side effects:

Long-term use of benzodiazepines is associated with behavioral disturbances – agitation, stress, depression and anxiety.

These are sometimes referred to as “paradoxical effects”.

When we talk about the clinical factors of benzodiazepines, we need to think about:

Benzodiazepines pharmacology is vast and complex. We have only touched upon many of the key factors you should consider. They remain a vital, instrumental drug class in the clinician’s toolkit. For more information and quiz questions on benzodiazepines, join our member’s zone today.