Azole Antifungals Pharmacology | All the Facts in One Place! 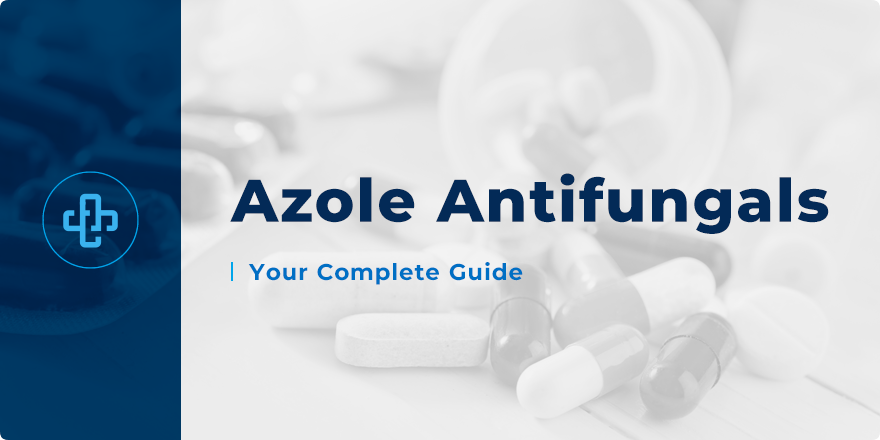 Azole antifungals are among the most widely prescribed antifungal drugs. They are used in the treatment of a wide and diverse range of fungal infections. Here, we review those indications, how azoles work and what side effects and interactions they’re linked to.

Broadly speaking, azole antifungal drugs are used to treat a diversity of infections:

Clotrimazole and econazole are routinely used to treat fungal infections such as athlete’s foot, jock itch, ringworm and yeast infections.

Ketoconazole has been largely replaced for systemic use by later triazole drugs, such as itraconazole. Ketoconazole has greater toxicity, poorer absorption and more limited spectrum of activity than later antifungal medicines.

Miconazole topical is mostly used to treat oral yeast infections. It is available as a buccal preparation.

With these indications in mind, let’s review how azole antifungals work – their mechanism of action.

Whether they belong to the imidazole or triazole class, azole antifungal drugs work via a common mode of action.

That mode of action involves interacting with ergosterol; an essential component that keeps the integrity of the fungal cell membrane together.

Without ergosterol to hand, cell growth and replication become impaired.

Through these means, azole antifungal drugs exert their therapeutic effect.

Side effects depend whether the drug is applied topically or whether it is administered systemically. Of course, it also depends on the drug in question and the current condition of the patient.

Topical side effects include:

Fluconazole is associated with many serious side effects:

Itraconazole is also associated with liver damage and heart failure.

Voriconazole is linked to vision problems and, in some patients, hallucinations.

Of course, given the range of medicines discussed here, the above list of side effects is not intended to be complete. Instead, it is intended to shine a spotlight on many common and serious effects that are associated with this diverse and important drug class.

When we talk about the clinical pharmacology of azole antifungals, we need to think about the following factors:

Azole antifungal drugs remain, then, an integral component in the treatment of fungal disease, for both topical and systemic fungal disease.

For even more facts and pharmacology quiz questions about azole antifungals pharmacology, register with PharmaFactz today. Check back to our pharmacy blog soon for even more great articles on antifungal drug classes!