Aspirin Pharmacology | All the Facts in One Place! 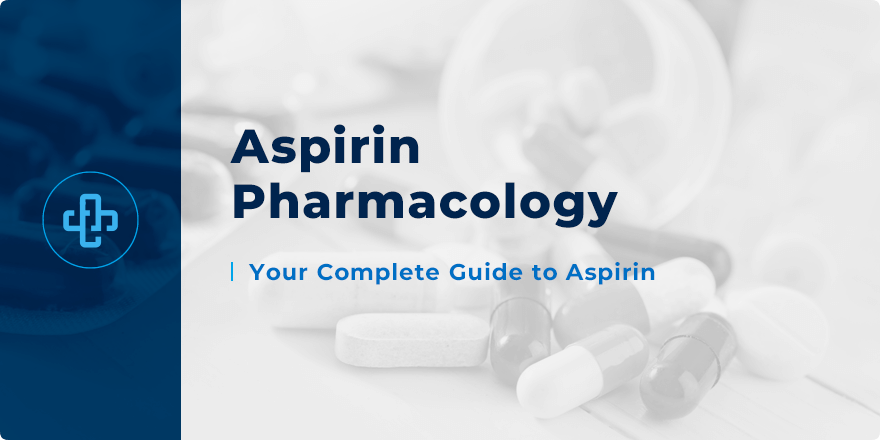 Also known as acetylsalicylic acid, aspirin has – in its various forms – been used for well over 2,500 years.

It was only as recently as 1897, though, that a German company – Bayer – modified the original precursor of aspirin into a less harmful, more therapeutic alternative. It remains one of the most widely used medicines, with more than 40,000 tonnes (or up to 100 billion pills) produced each year.

Aspirin is used to treat fever, pain and inflammation. It achieves this by suppressing production of pro-inflammatory prostaglandins and thromboxanes – suppression that occurs due to the drug’s irreversible binding to the COX enzyme.

Aspirin is used in the treatment of the following conditions:

Aspirin remains an increasingly important medicine in the clinician’s toolkit.

Aspirin works by irreversibly binding to COX, the cyclooxygenase enzyme.

The COX enzyme is responsible for producing pro-inflammatory prostaglandins and thromboxanes. By reducing production of thromboxane from arachidonic acid, aspirin prevents platelet aggregation – leading to a lower risk of thrombotic events, such as heart attack and stroke.

It’s worth mentioning that the anti-thrombotic powers of aspirin only take effect at low doses.

Aspirin is associated with its own range of potential side effects. These effects are linked to its mechanism of action.

Side effects associated with aspirin include:

Aspirin is a well-tolerated drug. Nonetheless, it comes with a range of distinct clinical considerations all students need to know.

When we talk about the clinical pharmacology of aspirin, we need to think about the following factors:

Want to test your knowledge of the pharmacology of aspirin? Register with PharmaFactz today to receive instant access to quiz questions, infographics, flashcards and more. Take a few seconds to join our pharmacy blog newsletter to receive all the latest facts direct to your email!