Antiemetics Pharmacology | All the Facts in One Place! 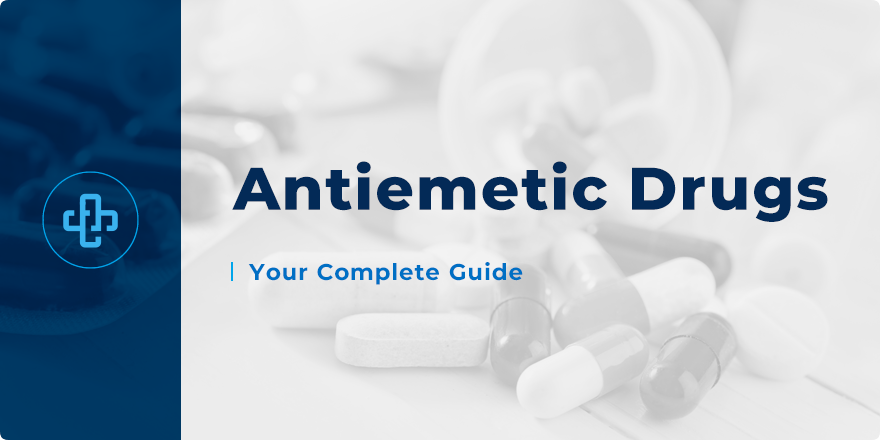 For the purposes of this guide, we will review antiemetic drugs along the following classification:

For each class, we review its primary members, indications, mechanism of action, side effect profile and drug interactions.

We can divide dopamine antagonists into three broad groups:

The third class are not antipsychotic drugs, but they share a common mechanism of action with those drugs – namely, antagonism of dopamine, D2 receptors.

Indications – prophylaxis and treatment of nausea and vomiting in a variety of contexts. However, they are particularly effective in cases of reduced gut motility.

Mechanism of action – as we have already alluded to, both medicines are antagonists at dopamine, D2 receptors. These receptors are found throughout the brain, including the chemoreceptor trigger zone (CTZ). D2 receptors are also found in high concentrations in the gut, leading to a prokinetic effect, further aiding their antiemetic, clinical effect.

Side effects associated with metoclopramide and domperidone include:

Extrapyramidal side effects are associated with metoclopramide, not domperidone. This is because domperidone does not cross the blood-brain barrier and, given that the CTZ is largely outside this barrier, domperidone can exert its antiemetic effect without causing more central extrapyramidal effects.

When we talk about the clinical pharmacology of metoclopramide and domperidone, we need to think about the following factors:

Mechanism of action – as with metoclopramide and domperidone, these three medicines work by antagonising D2 receptors found in the chemoreceptor trigger zone (CTZ). They are also typical antipsychotic drugs, their antipsychotic effects most likely due to their antagonism of D2 receptors in the mesolimbic pathway.

Side effects associated with droperidol, chlorpromazine and prochlorperazine include:

When we talk about the clinical pharmacology of phenothiazines and butyrophenones, we need to think about the following factors:

Next, let’s consider the value that 5-HT3 antagonists bring as clinical antiemetics.

The next class to review in our antiemetics pharmacology is 5-HT3 receptor antagonists, also known as “setrons”.

5-HT3 receptor antagonists are particularly effective in the treatment of:

For CINV, setrons are often given alongside another antiemetic medicine – such as dexamethasone or an NK1 receptor antagonist (see below), such as aprepitant – to boost their antiemetic effects.

When 5-HT3 receptors are activated, a stimulus passes onto the CTZ via the vagus nerve and solitary tract nucleus, triggering nausea and vomiting. However, these receptors play little to no role in the vestibular system, meaning triptans are ineffective at treating motion sickness.

Side effects associated with 5-HT3 receptor antagonists include:

When we talk about the clinical pharmacology of setrons, we need to think about the following factors:

The next antiemetic drug class to consider is the widely used H1 receptor antagonists.

H1 receptor antagonists are particularly effective at treating nausea and vomiting whose cause is motion sickness or vertigo.

Mechanism of action – histamine is an essential link between the vestibular system and the chemoreceptor trigger zone. Acetylcholine is another important link. H1 antagonists work by blocking this neuronal pathway – meaning they become particularly effective at alleviating nausea and vomiting in motion sickness or vertigo. However, many H1 antagonists, such as cyclizine, are useful for other causes – such as postoperative or drug-induced nausea and vomiting.

Side effects associated with H1 antagonists include:

Cyclizine is the least sedating of the major H1 antagonists.

When we talk about the clinical pharmacology of H1 antagonists, we need to think about the following factors:

Next, we move onto the NK1 receptor antagonists, our penultimate antiemetic drug class.

Aprepitant and rolapitant are not used in isolation. Instead, they are administered alongside another antiemetic drug – most commonly a 5-HT3 receptor antagonist or a steroid, such as dexamethasone – augmenting their antiemetic properties.

NK1 antagonists have been shown to be effective at treating both phases.

Mechanism: NK1 is a G-coupled protein receptor (GPCR) found in the central and peripheral nervous systems. The dominant ligand of this receptor is Substance P; an 11-amino acid neuropeptide that is found in high concentrations in the chemoreceptor trigger zone (CTZ) of the brain. By binding to and antagonising these receptors, Substance P cannot trigger its nerve impulses to the CTZ – reducing the vomiting reflex.

Side effects associated with NK1 receptor antagonists include:

When we talk about the clinical pharmacology of NK1 antagonists, we need to think about the following factors:

That concludes the major drug classes used as antiemetic drugs. However, there are other medicines – such as benzodiazepines – that also have antiemetic properties.

Before we wrap up our study of antiemetics pharmacology, it’s worth considering how some benzodiazepines are also used for their antiemetic properties:

In the case of midazolam, it has been used in patient’s pre-surgery to prevent nausea and vomiting.

Antiemetics pharmacology includes a diverse range of medicines – from H1 antagonists to 5-HT3 antagonists to typical antipsychotics. Nor are they used to treat all causes of nausea and vomiting. This added complexity reinforces the need for the student to consider all necessary factors before making the final clinical decision.

For even more facts and pharmacology quiz questions on the pharmacology of antiemetics, register with our member’s program today. Check back to our pharmacy blog soon for even more great facts on the various antiemetic drug classes!