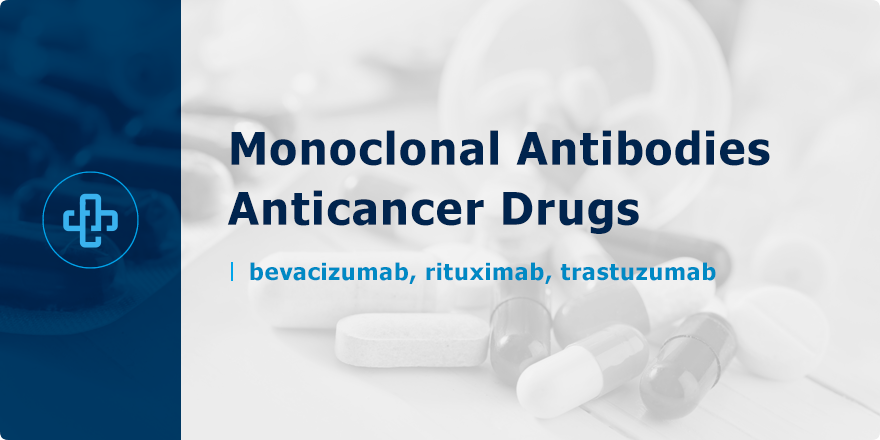 What are monoclonal antibodies? As their name suggests, these drugs are synthetic antibodies that have been engineered to restore, enhance, or replicate the body’s immunological response to certain attacks – such as from cancer cells.

Monoclonal antibodies are far more specific, in that they are designed to target cancer cells rather than healthy cells. This can, and is, achieved because the target antigens are more concentrated on cancer cells.

There are four types of monoclonal antibodies:

The first approved monoclonal antibody was muromonab produced from murine monoclonal antibodies. Scientists produced murine antibodies by vaccinating mice or hamsters with target antigens, stimulating B cells to produce antibodies against it. These B cells are present in the spleen, so these cells were removed and fused with immortal B lymphocyte tumor cells.

Fusion was needed because B cells cannot divide on their own, while tumor cells replicate rapidly. The fused cell is called a hybridoma cell, which reproduces fast and produces antibodies against a particular antigen. The antibodies produced by these hybrid cells showed severe side effects which limited their use. This occurred because the human body is trained to attack anything it recognizes as foreign.

Then chimeric monoclonal antibodies were produced, first approved in 1994. They had the same murine hybridoma technique for the generation of antigen-specific mouse antibodies, but the constant regions were replaced with human antibody. This technique helped minimize adverse effects because the number of foreign epitopes introduced to the patient were reduced.

First, by genetically altering the mouse’s immune system to carry human antibody genes. Secondly, by phage display techniques. This involves the insertion of a genomic library of complementarily determining regions into the bacteriophage virus, which expresses them. Then, these regions are grafted onto human scaffold forming a human monoclonal antibody. They have the least adverse effects of all.

Here, we explore many of the most widely used anticancer monoclonal antibodies. This is not intended to be a complete list, but does specify some of the most important medicines, their indications and adverse effects.

Other side effects occur as hypersensitivity reaction at first infusion, it could be managed with prophylactic glucocorticoids and/or antihistamines administration.

Anti-EGF-R antibodies may cause an acneiform rash that respond poorly to topical steroid creams.