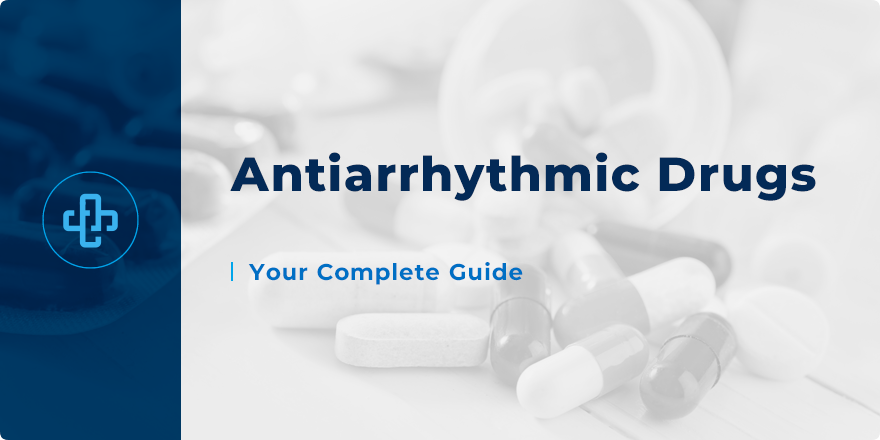 In this guide, we examine the mechanistic pharmacology of antiarrhythmic drugs.

Later articles detail clinical aspects – side effects and drug interactions – of each class. It’s important that the student understands how these drugs work on a mechanistic level, before immersing in the many clinical factors behind each medicine.

Antiarrhythmic drugs are used to treat a wide variety of heart rhythm disorders.

These disorders include, but are not limited to:

There are many kinds of antiarrhythmic drug.

It’s difficult to categorise antiarrhythmic medicines because many drugs have overlapping mechanisms of action.

This classification has four major classes:

Often, adenosine and digoxin are added as “class V” agents. Here though, we focus on the primary four antiarrhythmic drug classes.

Below, we examine each of these four major drug classes in turn – learning how they work to exert their therapeutic effects. Along the way, we learn how and why these mechanisms are linked to the arrythmias each drug is indicated to treat.

Not all antiarrhythmic drugs have the same mode of action.

The classification offered sorts the medicines in accordance with their mechanism of action.

Let’s review each of these drug classes in turn – starting with class I medicines.

Class I drugs have a core, common mode of action – namely, they are sodium channel blockers.

Unlike the other antiarrhythmic drug classes, class I medicines are further subdivided – into class Ia, class, Ib and class Ic – depending on how the medicine inpacts the length of the action potential.

The mnemonic, “1 double quarter pounder”, is often used to recall these medicines. 1 for Class I, and double and quarter and pounder having the same first letter as the above three medicines.

Examples of class Ib drugs include lidocaine, mexiletine and tocainide.

The mnemonic, “lettuce, mayo and tomato”, is often used to recall these medicines – with each of the first letter of each word corresponding to the medicine name.

They are used to treat ventricular tachycardia, among other arrhythmias. They have fallen out of use, however, in the treatment and prevention of arrhythmias during or after a heart attack.

Examples of class Ic drugs include flecainide and propafenone.

The mnemonic, “…and fries please”, can be used to recall both medicines.

Class Ic drugs should be avoided immediately after a heart attack.

They are used to treat arrhythmias such as paroxysmal atrial fibrillation and recurrent tachyarrhythmias, among other conditions.

Examples of class II drugs include beta blockers – all of which end in the suffix, “-lol”.

For example – esmolol, propranolol and metoprolol.

Beta blockers block the effects of catecholamines on beta-1 receptors – reducing sympathetic activity to the heart.

Conduction velocity is not decreased because they do not affect sodium channels.

However, sotalol also has beta-blocker activity. Amiodarone is more complex; it has class III activity, but it mostly acts via mechanisms like class I, II and IV.

Sotalol is used for ventricular tachycardias and atrial fibrillation.

Examples of class IV drugs include verapamil and diltiazem.

Both drugs work as calcium channel blockers. They are both non-dihydropyridine drugs.

They work to decrease conduction via the atrioventricular node.

They also reduce duration of phase II (plateau phase) of the cardiac action potential. This results in reduced contractility of the heart, meaning both medicines are often avoided in heart failure.

They are used to prevent paroxysmal supraventricular tachycardia, and to reduce ventricular rate in patients with atrial fibrillation – among other conditions.

Antiarrhythmic drugs are a complex set of medicines.

They are medicines that have been categorised into four distinct classes; though these classes omit the many real differences that exist between each class. Not only that, but many drugs have overlapping mechanisms of action.

There is no one neat and simple classification.

Here, we’ve examined that classification – reviewing the four major classes, the medicines within each class, how the class works and what indications that each class is used to treat.

For such a complex and widely differentiated subject in pharmacology, it’s important that students begin to understand how each antiarrhythmic drug class works and why it is used for the indications it now treats.

From there, you can build your knowledge on more clinical aspects – such as side effects and drug interactions – to have a more thorough, rounded understanding of these essential drugs and medicines.