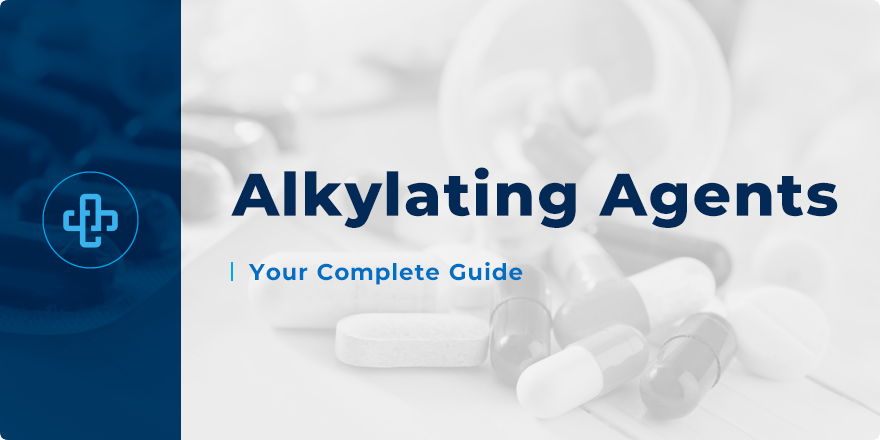 The history of alkylating agents finds its roots in the First World War.

One of those gasses was the sulfur mustards. Exposure to this gas led to symptoms such as skin irritation, blindness and pulmonary damage. It was noted that those exposed to the gas experienced bone marrow suppression and leukopenia.

From that point, contemporary researchers believed that alkylating agents could play a role at treating neoplasms.

This time, it was the less toxic nitrogen mustards. After extensive clinical trials, it was learned that nitrogen mustards, too, shrank tumors with consequent relief in symptoms. It was from here that alkylating agents were explored, developed, and what catalyzed their use as chemotherapeutic agents in modern medicine.

Even today, the alkylating drug class – in combination with other medicines – remain an important therapeutic tool in the treatment of many kinds of cancer.

There are many different alkylating agent classes.

Below, we classify the medicines into six distinct classes, though some drugs overlap between classes.

Note: though specific cancers are listed beside each drug, we have only listed their most primary uses/indications. Each anticancer drug may be used for other cancers not listed in this guide. In addition, anticancer drugs are given alongside other anticancer medicines in the treatment of these cancers.

With these classes in mind, let’s take a few minutes to learn more about how alkylating agents work to exert their therapeutic effects.

As their name suggests, alkylating agents work by “alkylating” DNA.

Alkylation means that DNA is unable to replicate. It also means that DNA repair may result in DNA strands breaking apart. Alkylating agents work independently of the cell cycle, regardless of what cell cycle phase is in operation – meaning that the rate of cell death is proportionally linked to the dose administered to the patient.

Alkylating agents covalently attach an alkyl group – CnH2n+1 – to the guanine base of DNA, at the number 7 nitrogen atom of the purine ring.

Some alkylating agents act non-specifically – meaning those drugs are active under present conditions in the cell.

Some drugs must be activated.

Cyclophosphamide is one such example. It must be converted to its active metabolite, phosphoramide mustard; a metabolite only formed in cells with low levels of aldehyde dehydrogenase (ALDH). ALDH is found in high concentrations in tissues such as bone marrow, liver and intestinal epithelium – protecting these actively proliferating cells from the formation of phosphoramide mustard.

Dacarbazine is not an alkylating agent per se until it is converted, via hepatic metabolism, to diazomethane. Dacarbazine also works by methylating DNA at the O-6 and N-7 positions.

Some alkylating agents – such as busulfan – work by a dialkylating effect; reacting with two 7-N-guanine residues, which may be on the same strand or on two different strands.

Platinum-based drugs – such as cisplatin, carboplatin and oxaliplatin – are classified as “alkylating-like”. They do not add an alkyl group, but they do damage DNA in a manner similar to the effects of classical alkylating agents. They also bind to N7 of guanine.

Side effects depend on the alkylating agent in question.

Broadly speaking though, alkylating agents are linked to:

More specific side effects of alkylating agents include:

Here, we’ve reviewed their history, classification, primary indications, notable side effects, and other key clinical details that students are expected to know.

For even more facts and pharmacology quiz questions on alkylating agents pharmacology, register with PharmaFactz today. Check back to our pharmacy blog soon for even more great articles on other anticancer drug classes!